Lets keep it between you, me and the gatepost, Miss Martha Bryant is much older than her death certificate claims. She or a member of her household was consistent about her age until her last census in 1910 shaved off a few years. Saying she was 50 something may have been a little difficult for Miss Martha. The conspiracy to keep her younger continued with her death when her age was reduced another 4 years. 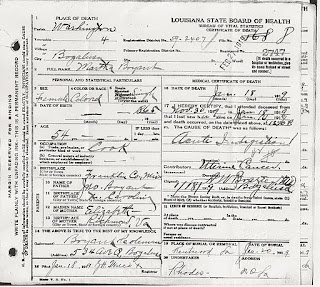 I know that the 1854 birth year is closer to accurate, here is why. Martha is named on the 1857 deed of gift of her family's slave owner John McDaniel along with her mother and brother Robert "Bob".

This Indenture and Deed of Gift made and entered into on this the 12th day of November 1857 by John McDaniel of the county of Franklin in the State of Mississippi witness That for and in consideration of the natural love and affection I have for and bear to my son James H. McDaniel...I Give, Grant and Deed...ELIZABETH a woman & child BOB a boy, MARTHA a girl

Elizabeth and her child Bob were grouped as a pair, Bob would not be separated from Elizabeth because he was too young and needed the direct care of his mother. Martha was older than Bob. I guess Martha is a girl of 4-5 years of age and her brother Bob is probably 2-3 years of age since he was not described as an infant, thus Martha was likely born about 1853-1855.

Martha Bryant was the daughter of John and Elizabeth Bryant, born in Franklin County, Mississippi. After the Civil War, she went to Natchez to live near a sister to attend school. She returned to Jefferson County to live with her mother. She never married nor had children. She remained with her mother and nursed her during her last illness. Martha's mother willed her the 80 acres of land the family purchased for $12 and a bale of cotton. Martha went with family to Bogalusa, Louisiana, a thriving timber industry town. She died there 18 Jan 1919. Her nephew Bryant Coleman was her informant.

John and Elizabeth's descendants married members of my maternal family.