Opportunity To Make A Good Man 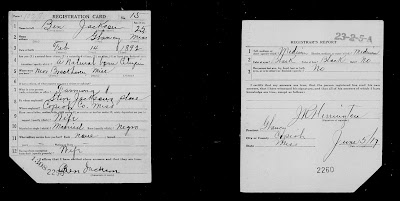 Ben Washington found himself in a precarious situation in the fall of 1908. The Chancery Court of Copiah County, Mississippi, labeled him a bastard; his mother died in 1905, leaving him in the care of a man said to be his father, William Washington, who was cruel and abusive.

A pitiful, half naked Ben arrived at the home of Steve Jackson in 1906. Steve and his recent bride, Pearl Shannon, had started their family but were willing to adopt Ben.

Jackson told the court he could give Ben a good home, teach him to work, to be upright, honest, send him to school and see that he had an opportunity to make a good man.

Sixteen years old Ben requested the court change his surname from Washington to Jackson. The adoption and request for surname change was granted by the court, 28th Sep 1908.

In 1910, eight-teen years old Ben Jackson was living in the Jackson household with his adopted parents, siblings, and paternal grandparents.

Ben was a married man in 1920. Apparently he did become a good man. His younger brother Versie Washington was living with Ben and his wife Bettie. According to their World War I Draft Registration Cards, Ben was living on Steve Jackson's place and Versie worked for Steve Jackson.

During this season of thankfulness, I am thankful a good man, Steve Jackson, invested time and resources in the lives of brothers Ben and Versie.

Posted by LindaRe at 5:21 PM No comments: Links to this post

A Girl a Worm and a Fish

Gee enjoys worms and bugs which she used to catch her first fish, a brim I think. 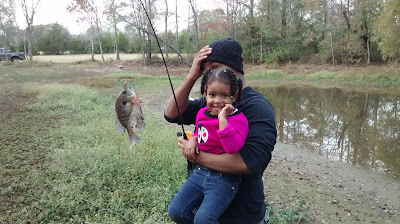 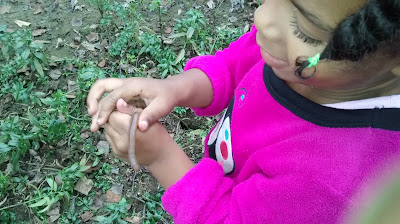 How does Gee connect to my family?
Gee is my brother's, James, granddaughter.