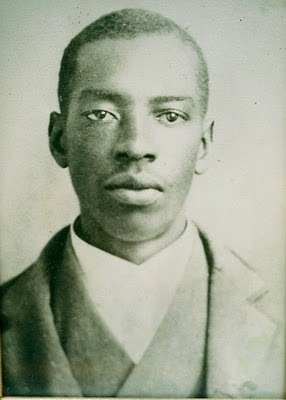 Octavius August Markham was the fifth child, the fourth son born to Monroe Markham and his wife Mary. Octavius was born in the year 1879, when milk was first sold in glass bottles, on Feb 2. He was known as the sickly son born with allergies and likely asthmatic. Octavius health conditions prevented him from being as prosperous with farming as his siblings. He managed with the help of his children, his faith, and determination. 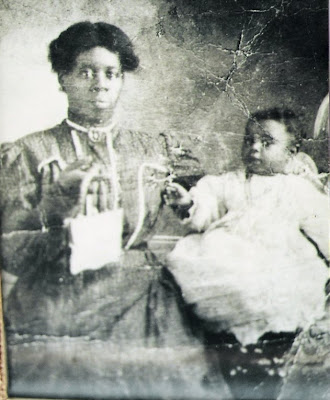 Octavius encouraged his children to acquire as much education that was available. Octavis' children may have been the first of Monroe's grandchildren to obtain college degrees. 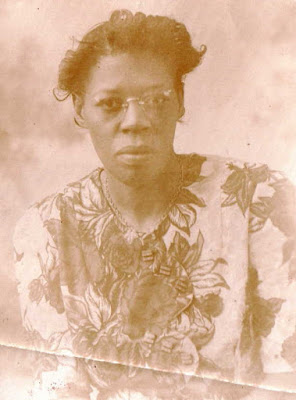 The couple's first child was Evie Jane, known later as Eva Jane, who was born 10 May 1907. She was a public school teacher. She never married nor had children. Eva died 16 Aug 1993 in Jackson, MS.

Larry David, aka LD, was born on 2 Jul 1909. He was a World War II veteran. When lumber companies came to the Brookhaven area seeking men to work in the lumber industry and willing to relocate to northern California, LD was one of the first to go west. He worked for the Mt. Shasta Kimberly-Clark Corporation Plant. He married Leontine Luceil Bearden Gearing. No children were born to the union. LD died 12 Sep 1962, in Siskiyou County, California. 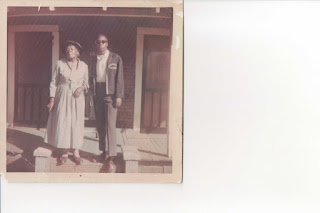 Allie Mae was born 29 Sep 1911. She earned her high school dipolma through a program sponser by a Franklin D Roosevelt program. Allie worked as a domestic, public school teacher and insurance agent. Allie married John Moncrieft and no children were born to the union. Allie died 28 Sep 2016, one day shy of her 105th birthday. 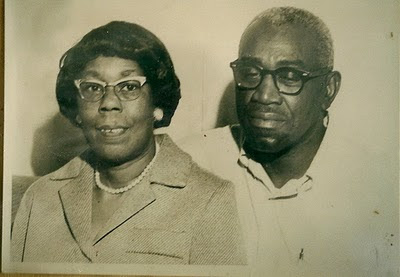 Twin daughters Louvella and Louvenia were born on 13 Nov 1914. Their father chose rhyming names for his daughters but in 1899 when he named his twin sisters non-rhyming names, Beatrice and Missouri, his community complained. I suppose Octavius decided to conform to community standards when he named his daughters. Louvella graduated from Alexander High School in Brookhaven, MS. After high school, she attended Alcorn and Jackson State University where she received a B. S. degree in elementary education. She taught children in various schools in the Lincoln County area. Louvella never married nor had children. She died in January 1994. 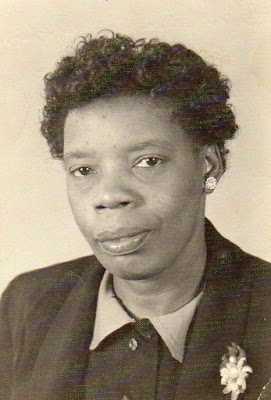 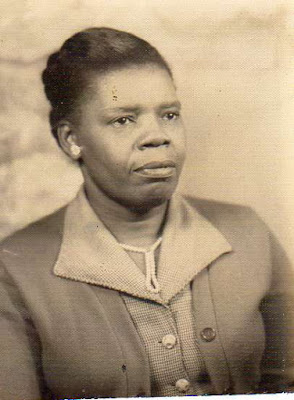 Early, a veteran of World War II was born 9 Sep 1917. He followed his brother LD to California to work in the lumber industry. He worked 28 years for the Mt. Shasta Kimberly-Clark Corporation Plant. In 1962, he married Myrtis Smith Hilliard. No children were born to the union. Early died 14 Jul 1998 in Beaverton, Oregon. 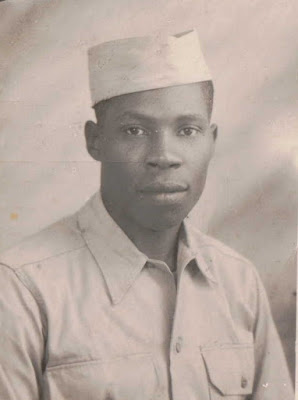 The last child of Octavius and Mamie was Marilda Louise who was born on 20 Jun 1920. Marilda was the only child to make Octavius and Mamie grandparents. She married Ely Diggs in 1947. The couple had one son, James. She died 24 Jun 1987 in Jackson, MS. 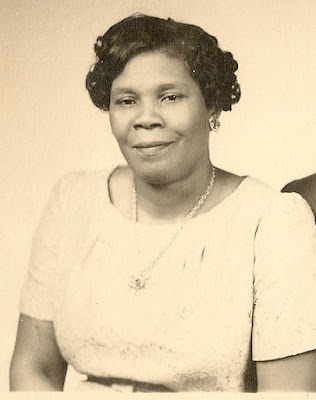 Octavius died in 1952 of kidney disease. His wife Mamie lived several more years and died in 1971. They both died in Lincoln County, MS. 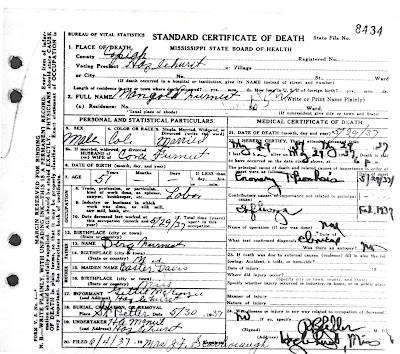 Mangold Furnace was born about 1882 in Mississippi, likely Copiah County or a neighboring county.

In 1900, he is living with his parents Durg/Derg and Easter, twin brother Jake and several other siblings. Mangold and twin are listed as 17 years old. No one in the household can read or write.

Mangold married Cora Vardman on Jan 1905 in Copiah County. Their known children were all girls: Gettie, Essie, and Pearlie. Mangold made his living as a sharecropper.

By 1930, Gettie and Pearlie were absent from this household but Essie was still there.

Mangold died 29 May 1937, Hazlehurst, Copiah County, MS of a heart attack and flu contributed to his death.

How does Mangold connect to my family tree? I am not sure how Mangold connects to my tree. I suspect Mangold's father Durg Furnace was a brother to my 2nd great-grandmother, Jane Furnace Overton. 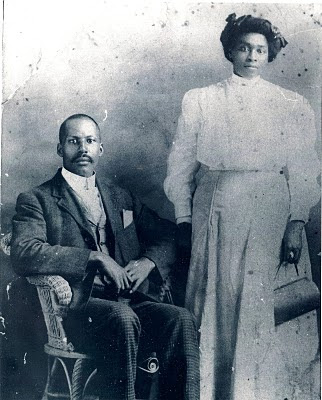 Finally, Monroe and his wife Mary were blessed with a daughter after three boys. She was born in the winter of January 1877, in the Caseyville village of Lincoln County. Eudora was not seen on the 1880 census but her birth year is consistent in the census and other records. The educable children's lists for 1885 and 1892 has Eudora as 8 years and 14 years, respectfully.

Eudora married Henry Coleman on 16 Dec 1896, in Lincoln County, MS. They were successful farmers on the land they purchased in Copiah County, MS, and were inspirational community leaders. After taking care of her family, Dora would sit in the evenings teaching her husband how to read. Henry's goal was to be able to read God's word. He would become successful in the ministry becoming a pastor at the family's church, Galilee AME Church in Caseyville, MS.

Dora was called Sister Dora by several of her younger siblings. Dora and Henry had 15 children, coming close to the 17 children Dora's mother gave birth to. Dora and her mother would both give birth to children in the same years. Dora died on 27 Sep 1948 in Brookhaven, MS.

Eudora and Henry's Children were: 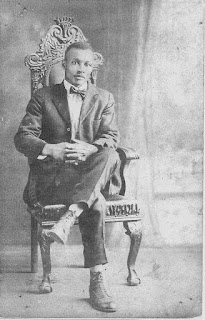 3)Clara Jane (1900-1995) married Samuel Oatis and David Tyler. No children were born to these unions. 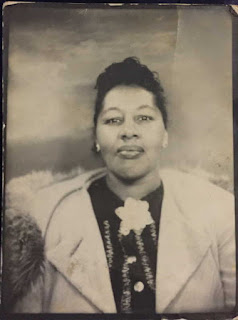 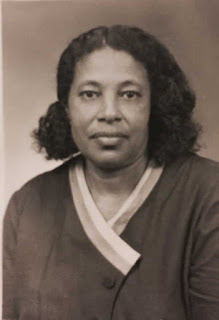 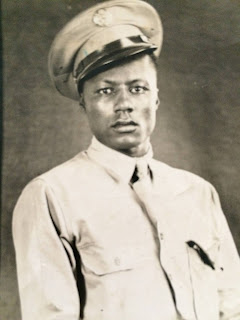 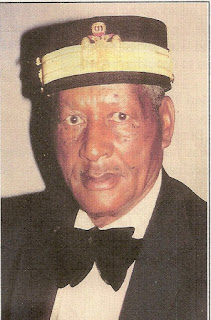 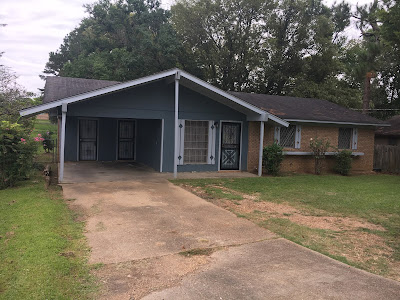 My parents' three-bedroom, one-bath home for our family of seven was sold earlier last year to investors. We moved there in 1972 from a long trail of renting shotgun apartments. My father died unexpectedly in 1980, leaving my mother and three children in the home. The remaining children left, leaving Mama who eventually begins her battle with Alzheimer's disease. Mama died in 2014

As young adults, we were eager to leave our childhood home, to build our own place called home. As long as the home of our childhood remains in the family, we always have a home to return to. We go back home for the holidays or send our children back home for the summer. There are days when we need respite from the responsibilities of adulting, so we just go home to sip a cold beverage, to see a parent's warm smile, to sit in the old chair with the worn cushions.

When that home is sold, there is no place for you or your children to return. The grandchildren have no place to envision you as a child. You have a childhood home no more. 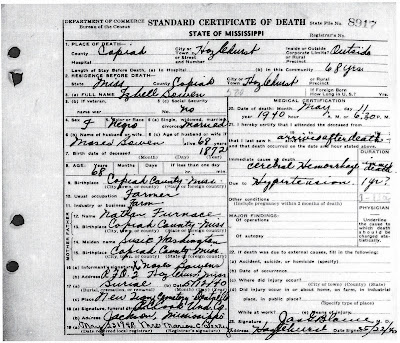 
Alexander and Charlotte Furnace were my 2nd great grandparents.

Posted by LindaRe at 3:53 PM No comments:

Well, it is another boy for Monroe and his wife Mary. The boy was the 3rd child and the third son born on the same land where his father was enslaved near Caseyville, Mississippi. Keeping with the family tradition of naming their sons after biblical men beginning with the letter "J", the couple named this son Joseph who was born about 1876. Joseph was listed as 4 years on the 1880 Federal census. On the 1880 census, Monroe is listed as 28 yrs old, and his wife Mary is 25 yrs old. This is the only document where Joseph appears and he was unknown to elderly cousins. 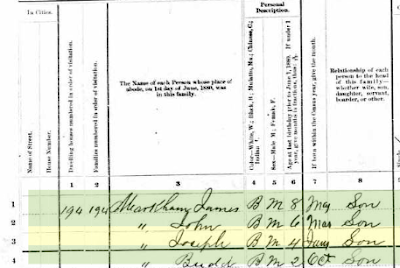 The 1885 Educable Children List is a document where Joseph should have been named. This list consisted of all school age children. Joseph would be about nine years old in 1885. His siblings were named but Joseph was not.

Fransharon was the daughter of Frances Louise Furnace, granddaughter of Woodrow Furnace, Sr., and Bessie Lee Gordon. I am not sure of the relationship between Fransharon, her mother and grandfather, and myself. My Furnace family has deep roots in Copiah County, Mississippi.