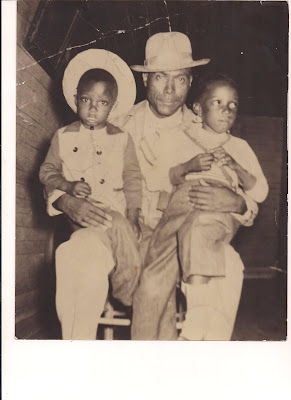 If all you have is circumstantial evidence when researching for the slave owner of ancestors, anything you discover can be a clue to add to your mound of evidence. I came across a few death certificates that list the burial place as Lucky Hit for a few members of my father's maternal family. The suspected slave owner, Hezekiah George David Brown, settled at Lucky Hit Plantation after his marriage.

"Hezekiah married Mary Peachy Taliaferro (born March 3, 1831) in a wedding that must have been planned well in advance with many attendants, including two sisters of Jefferson Davis. Hezekiah was 24 and Mary Peachy Taliaferro was 16 when the wedding took place on December 23, 1847, and was a major social event in plantation life of that day. After Christmas he returned to Annapolis and, as a married man, he was allowed to resign honorably, to the delight of Mrs. Taliaferro who urged the young couple to live with her at "Spring Hill" near Hazelhurst. His declining this invitation was a masterpiece of diplomacy and they settled at "Lucky Hit", a nearby plantation."
From Research Notes of Suzanne Brown

Today, Lucky Hit Cemetery is nonexistent. I contacted descendants of Hezekiah George David Brown and they have no idea where cemeteries are on the Brown property. Was Lucky Hit the burial place of former slaves on HGD Brown's plantation or was it a cemetery established after slavery ended?

Felix is a nephew of the above Virginia, and a cousin of Pedro's wife Emsley. 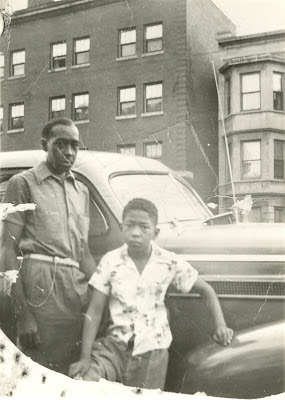 A. C. Markham, the Child
1911 - 1977
Son of John Markham and Abbie Harris
Husband of Ophelia Smith
Father of Rosalyn Markham
The adult is unknown.

A. C. is my mother's second cousin once removed.

Posted by LindaRe at 11:12 AM 2 comments: Links to this post

Tombstone Tuesday
Resting in the Shade 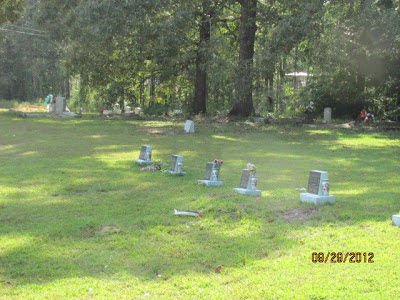 Posted by LindaRe at 1:08 PM No comments: Links to this post

The Civil War changed Almarinda's world, her husband died in 1864 and the emancipation of the slaves. She was a member of the slave owning class. Nathaniel Kinnison, her father, owned 91 slaves, her husband Albert Shaw owned 27 slaves and her mother-in-law Mary Shaw owned 55 in Jefferson County, MS.

This letter was written to her mother-in-law Mary Shaw. Almarinda wrote of her frustrations with the Federal troops, freedmen, and her loneliness.

Primus and Abe arrived safely at my home wednesday night. I thank you very much for the things you sent me. Only way of my ever repaying you for your kindness is the love I feel for you & your family. There is scarcely a minute in the day but of what I am thinking of my darling husband. but seldom I feel any liveliness about me unless I have very lively company. Oh that dreadful dreary blank feeling I have when I am all alone. No one to go to for advice or assistance when I have my little troubles. but there is no use murmurring We cannot alter anything by it. My neighbors have been kind which helps to console me somewhat. We are suffering very much for the want of rain. I am afraid the corn will be and short. we planted no cotton. it was as much as Mr. Beal could do to get the negroes to half cultivate the corn. The Provost Marshal was here last week making contracts with the negroes. He would not let me give the women but one dollar a month & the men three dollars. I had made a contract with them previous to his coming giving them the highest government price, only for a month. I could scarcely get them to stay with me without turning off Mr. Beal. Before I would feed & clothe a parcel of lazy negroes & have to pay them such high prices & have nobody to make them work. I would turn the last one of them off, They acted like they were crazy until the provost marshal had a chat with them. he told me not to allow any looks of impudence from them to report it to him & he would come out here if he had to walk every step of the way & he would staighten them so they never would look sour again. I would like to have had him for an overseer during the war.

The negroes are not satisfied but they are afraid to say anything. I have taken the oath. will have to take another so I hear. an oath to sustain the emancipation proclamation. I do not care one cent if the negroes are free very little more than I do now for I do just as much work as my negro woman about the yard. If they do anything a little extra, they are so tender thay lay up sick. I could not get them to spin any scarcely. well I thought I would see if I could learn to spin. I carded my own rolls & spun four five cut hanks in four days and it was very nice thread. That proved to me that they idled off their time for none of them spin much more. I have been at it every since the war commenced. I cannot bear the idea of raising up my children with a parcel of negroes. they will do all in their power to ruin them. I am sending Clarence & Nannie to school. Clarence and little Buddy have both been sick but are well now. some of the negroes are sick. My health is very good. I sometimes feel quite feeble but I work that feeling off, did not give up to it. You spoke of my making another bill & sending it to you. The most that I shall want will be clothing for my children. ? domestic bleached. I do not know if it is worth while to bother you, for I shall want to carry some cotton to Natchez in the course of a month & I could go in myself. I do not like to take such a little price for cotton so long as I can do without selling. I will not sell. I must get flour anyhow & some coffee, flour is worth twenty dollars a barrel in Brookhaven. Calico fifty cents a yrd, coffee 45 cents. everything very high. The yankees are continually passing often stop, they try to do as they please whenever they come into the yard. I made some of them terrible angry one day, they marched into the kitchen & Belle was dishing out the milk to about a dozen of them, without ever asking me a word. I made her stop giving it them. it made the Yankees terrible angry. I think I might have done wrong, but how can anybody take everything submit to them & the negroes too. how can anyone do it. I get angry every time I see one of them come in. They try to make us feel humble and dependent on them.

Tell --- see me. I -- not be satisfied with any excess. I am very much obliged to you for the carriage. Mr. Beal says he can fix it up nearly as good as ever. I can take my children with me whenever I go from home. I stay at home on their account. My buggy is so small I never like to take them all at a time & I do not like to them without some white person to watch over them. I will close my letter for my sheet is full nearly. give my love to all & a large portion yourself. Clarence sends love to you & says he will never forget his good Pa.

Almarinda was born 09 September 1835 in Jefferson County, Mississippi and died 01 October 1869 in Lincoln County. She was the daughter of Nathaniel Kinnison, Jr., and Lydia Stotts. She married Albert Shaw, son of Thompson Breckenridge Shaw and Mary Shaw. Almarinda and Albert had two children; Clarence b. 1859 and Albert b. 1863.

Posted by LindaRe at 9:57 PM 2 comments: Links to this post

I wish I knew what this church split was about. Did they disagree about doctrine, pastoral leadership, worship style, money, moral scandal, etc.?

The churches are located in the same rural community, less than a city block separates the two churches. Demyers kin are members of the church and are buried in the churches shared cemetery. 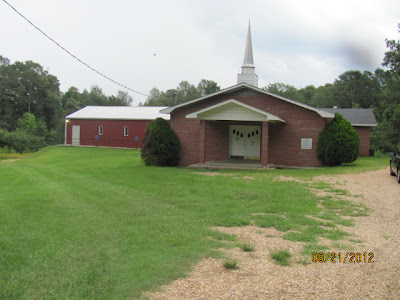 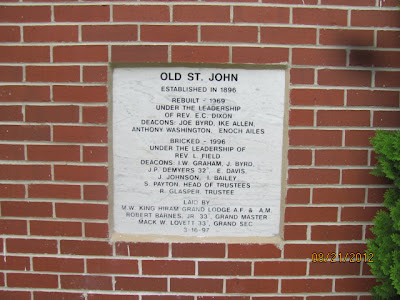 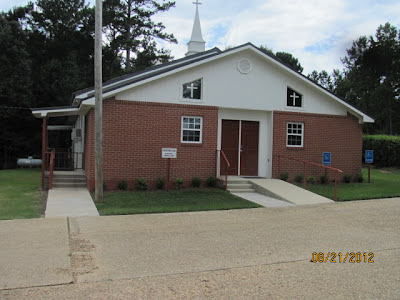 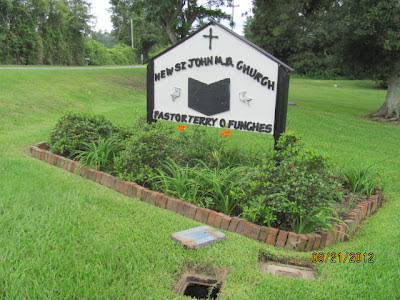 Posted by LindaRe at 1:56 PM 2 comments: Links to this post 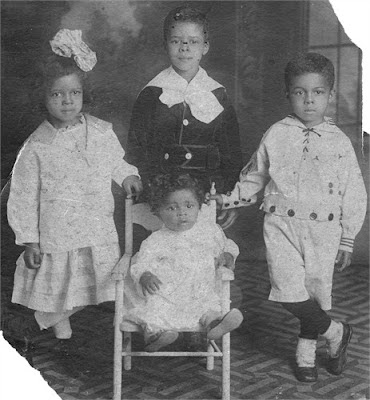 Mary's son married a cousin of the family.

Posted by LindaRe at 3:22 PM 3 comments: Links to this post 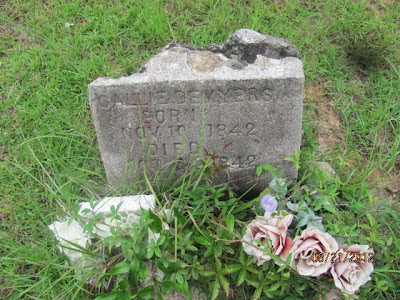 She was the wife of Lawrence Demyers

Posted by LindaRe at 1:02 PM 2 comments: Links to this post