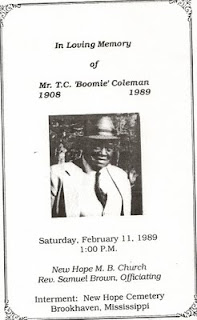 Boomie, as he was known to his many relatives and friends, served during World War II in the U.S. Army from 1942 to 1945.

At an early age he united with the New Hope Missionary Baptist Church, where he served as Church Clerk for a number of years and Chairman of the Deacon Board. He attended services regularly until his health began to fail.

He was preceded in death by his parents, Luther and Eddie Roberts Coleman and one brother, George Coleman.