Missouri Sanders spent her last Sunday morning listening to a sermon by Reverend Alex Jones at Cool Spring Church. She probably meditated on his sermon and on the one who gave the sermon. After service, she was greeted by family and friends. According to a witness, she slipped and fell on the church steps. She was asked if she was alright, she said she was okay and proceeded to her car. Church members noticed she did not leave the church grounds, approached her car and saw her body was slumped and she was unconscious. Missouri was rushed to the local hospital where she died hours later of a broken neck. 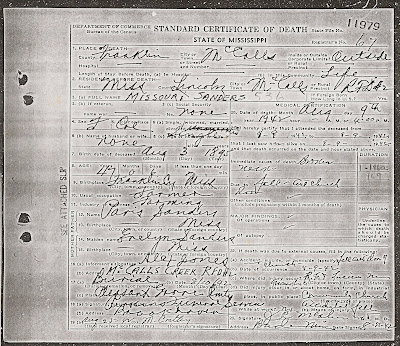 Missouri's death was similar to her life, much to talk about. The Reverend Alex Jones was the father of her nine children. He was also her sister Mary Jane's husband. Alex Jones married Mary Jane in August 1900. Their first child of 15 children was born about 1903. Missouri had her first child with Jones about 1907.

The enumerator of the 1930 census described the children as bastards. Apparently, tongues wagged.

Alex Jones could have his cake and eat it too. Alex and wife lived a few doors down from Missouri in Franklin County, Mississippi.

May she rest in peace.

Missouri was born 03 Aug 1895, died 09 Aug 1942, in Franklin County, Mississippi. Missouri and Mary Jane were the daughters of Paris Sanders and Eveline Saulsbury. Their half sister Freddie Nelson's son married into my maternal family.