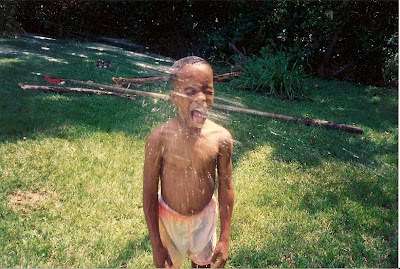 My family did not celebrate the 4th when I was a child. It was just another long hot day. I was about nine or ten when I realized for many families it was a day filled with barbeque parties, watermelon feasts, new summer clothes, and fireworks shows. It was not discussed why we didn't celebrate the holiday, it just was.

I wonder if it was because we were African American that we didn't celebrate. Maybe my folks felt like Frederick Douglass.

"What to the American slave is your Fourth of July? I answer, a day that reveals to him more than all other days of the year, the gross injustice and cruelty to which he is the constant victim. To him your celebration is a sham; your boasted liberty an unholy license; your national greatness, swelling vanity; your sounds of rejoicing are empty and heartless; your shouts of liberty and equality, hollow mock; your prayers and hymns, your sermons and thanksgivings, with all your religious parade and solemnity, are to him mere bombast, fraud, deception, impiety, and hypocrisy - a thin veil to cover up crimes which would disgrace a nation of savages. There is not a nation of the earth guilty of practices more shocking and bloody than are the people of these United States at this very hour."
Frederick Douglass - July 4, 1852

Maybe it was because we were southerners. I am a Mississippian.

"In the final days of the siege, the people of Vicksburg ate rats, cane shoots and bark. For 47 days Gen. Ulysses S. Grant ringed the city with 75,000 Union troops. Cannon balls crashed in; the sound of musketry seldom died. Finally the city surrendered. The date was July 4, 1863. After that, for the people of Vicksburg, the Fourth of July was never a day to be celebrated. National holiday or no, banks and stores stayed open in Vicksburg. Firecrackers never popped, skyrockets never tore the night sky." Time Magazine July 09 1945

Maybe it was because the 4th was another summer day; glorious, free from school, fun filled day of your own making. It was just another day to be happy. 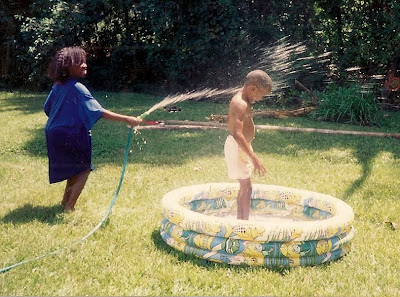 My children Joseph and Joy are in above photos.