Amanuensis Monday
The Yankees at Brookhaven 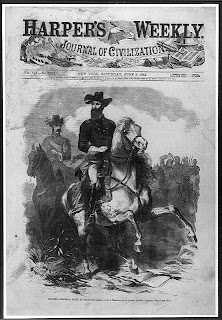 Colonel Grierson leading his troops.
Courtesy of Library of Congress

A diversion to keep Confederate officers occupied so Major General Grant could move troops to Vicksburg was a cavalry raid launched into Mississippi from La Grange, Tenn., on April 17, 1863. It was the beginning of 16 days of nearly non-stop movement, widespread destruction and frequent battle. When it was over, Grant would accurately describe it as one of the most brilliant cavalry exploits of the Civil War. The raiders were lead by Colonel Benjamin H. Grierson and they visited the area where my people were enslaved. Here is a newspaper editorial of Grierson's raiders in the ancestor's hometown, Brookhaven, Mississippi.

We have information that the enemy entered Brookhaven yesterday evening, burnt the railroad depot, cut the wires, and after doing what other damage they pleased, leisurely retired (a portion of them at least) in an easterly direction.

Wonder if Maj. Clarke of the Conscript camp at Brookhaven was taken? Or are the conscripts furnished with muskets, powder and ball?

Well, well! we are free to admit that Mr. (we beg his pardon) Colonel Grierson and his boys have had a "good time of it" for the last week. It is actually amusing to think (although, we confess, annoying) how they have roved around, within forty or fifty miles of the Capitol of the State--eating fried ham and eggs and broiled spring chickens every morning for breakfast, at the expense of planters whom they choose to honor with a visit--luxuriating on fat mutton, green peas and (of course) strawberries and cream for dinner--and all this without caring for the terrible fact (confound their impudence) that they were within a few hours ride of Lieutenant General John C. Pemberton's headquarters, or thinking for an instant that the commander-in-chief of the State Troops lived, moved, breathed and had his being in the city of Jackson. It is actually provoking to think how Colonel (we mean Brigadier General--begging his pardon) Grierson and his jolly riders have enjoyed themselves for a whole week. Why it is really worth a ten month's furlough of a Confederate soldier, this pleasure excursion of the roving blades of Iowa and Illinois in the heart of the "Sunny South!" The fun they must have enjoyed is actually enviable!

We hope Maj. Gen. Grierson (we have a penchant for military titles) will not take off the wires of the telegraph as he proceeds--for, as it seems he can't be caught or headed off, we feel some curiosity to be regularly informed of his whereabouts.