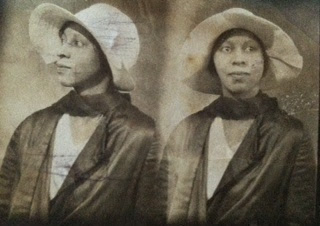 Mary was born 26 May 1900. The 1900 census records her as a 1 month old baby in the household of her parents, James and Anna Markham, with older brother James Monroe. They were living in Caseyville near Mary's grandparents Monroe and Mary Markham, uncle Grant Markham and other relatives. They were still in the same community by 1920. The family had grown to include Mary and her siblings: James Monroe, Asriah, Bessie, Elizabeth, Theodosia, and Alberta.

The 1930 household of Mary's parents were reduced by three. Asriah died of a accidental gunshot wound on 1 Apr 1923. Mary and brother James Monroe were a part of the Great Migration. The two moved to Chicago where James Monroe was a Pullman Porter and 29 years old Mary was a beauty operator, working in a beauty parlor. In Nov 1930, Mary married Jay Lively.

By 1940, Mary and Jay Lively were listed as lodgers in Chicago. Mary continued her career as a beauty operator and Jay was a porter in a department store. Jay died in Dec 1945. Back home in Caseyville, Mary's father had died, and her mother Anna, sister Elizabeth were living on the old homestead. All of the siblings, except Alberta, migrated from Mississippi.

Mary 2nd husband was Wallace Young. At the time of her death, Mary was using the Lively surname. Mary died 27 Mar 1985, in Chicago.

How does Mary connect to my family?
Mary's father, James Markham, and my grandmother Alice Markham Marshall were siblings.