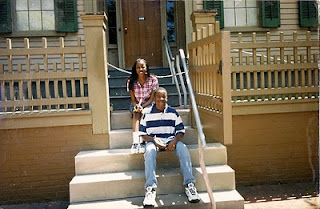 Two of my three children sitting on the steps of President Lincoln's Springfield home.
Growing up during the sixties in a working class African American community, almost every household had on the wall a combination, if not all, of a calendar, an art print of Jesus, photographs of Martin Luther King and President John Kennedy. Neatly arranged in a group or randomly placed on the wall, framed or taped to cardboard, they were our heroes.

In school, we memorized the presidents names in the order they served. A poster of all the presidents was on a wall with silhouettes of Washington and Lincoln. I remember one year we wrote essays. We all wanted Lincoln or Washington. I choose James Garfield because I knew he was assassinated, always interested in the morbid.

Thank you to all the men who served.
Posted by LindaRe at 10:57 AM