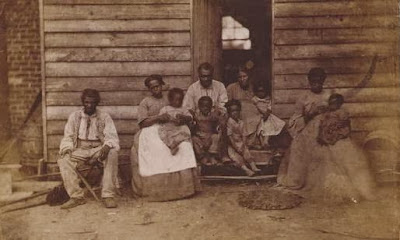 I thought of this letter while watching the PBS series, African Americans: Many Rivers to Cross, Part 3 - Into the Fire - 1861-1896. Peggy does not connect to my family but found her letter to be very touching. My great grandfather Washington Marshall, who was a slave in Copiah County, MS, spoke of the siblings he left in Virginia. I can easily imagine him writing Peggy's letter

The letter was written by Reverend J. H. Nichols, Starkville, MS, on behalf of Peggie, to William Peacock, Shelbyville, TN. William Peacock was Kelly's former owner who had sold her away from her family many years before. Kelly was inquiring of Peacock if he knew the whereabouts of any surviving family members whom she had not seen since being sold.

The letter represents a woman's determination to locate before she died surviving members of her family from whom she had long been separated. It provides poignant evidence of the tragic and lingering consequences of slavery on the individual.

I am trying to find my mother and father. My father's name was named Prince and my mother's name was Rose. They both belong to above Peacock. They had four children when I was sold. Their names Peggie, Isaac, John, and George and I had two half sisters belonging to old Thomas Peacock.

I was sold to James Wortham in KY where I lived 3 years then he sold me to Jack Tucker and then was sold to Evan Davis in this state.

Any information given if any or the where abouts of them will be thankfully received. Let me know if they are dead or alive.

My name was Peggie one of the children of Prince and Rose.