The segregationist's credo was "separate but equal."After the Supreme Court's decision in Brown v. Board of Education decision, a light bulb moment occurred to white Mississippians when they began to realize things were not equal. A local newspaper in Brookhaven, MS, editorialized;

Services provided by taxpayers dollars were separate and unequal. Brookhaven and the Lincoln County area did not have adequate schools for African Americans students. There was no bus service for children who lived outside the city limits, you got there the best you could. The public library was for whites only. A one room building used for a library for African Americans was community based. A public park and swimming pool did not exist.

The "fair deal" in Brookhaven would be a new public school, a swimming pool, park, and public library for the Negroes. Providing services for Negroes that were already in place for white citizens were meant to appease.

Construction began on the Eva Harris School in 1958, graduating the first class in 1961. Bus services were extended to children who were annexed into the Brookhaven District for the first time in 1961.

The Sovereignty Commission reminded African American leaders of the "progress" that had been made. 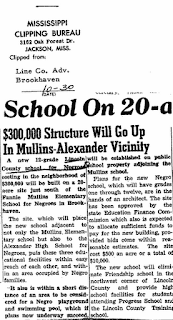