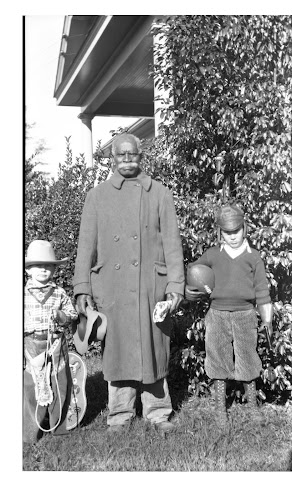 We believe we know the name of the distinguished, dignified African American man in photographs with a Christmas gift in his hand shown on this blog during the Christmas season. I do community research and the name is already on my family tree.

A few years ago, Georgia Wise and her family shared pictures of the gentleman. On the above picture, he is standing with two small boys adorned with their Christmas gifts. One of the boys is Georgia's father who remembered they called the man Uncle Gus. In December 2013, he remembered the man's full name was Andrew Gustavus.

Looking over the emails from Georgia, I learned Andrew was born during slavery and he told the young boys tales of eating from a trough.

Memories of the Trough from the Slave Narratives
"Ebry day dar wus a big pail uf milk put in a big trough in front uf mammy Lit's house, under a shed, fur all uf de little black chilluns ter eat wid bread in it. Ebry one uf us hed er spoon en we wuld dip in ter it en see who culd git the mostern. Mammy Lit wuld beat me ober de head en tell me not ter be so greedy en eat it all frum de udders." Barney Alford of Mississippi

"Mrs. Sartin had a long wooden trough constructed just outside the kitchen door in which was placed "pot-likker", milk, and a generous portion of cornbread in a pulverized state. About the middle of the morning Mrs. Sartin would walk to the negro quarters, and have all the little negroes who ranged in age from 1 to 8 rounded up like so many small animals."
Harry Bridges of Pike County, Mississippi

"There was a long trough about a foot deep in Grandma May's house. This she filled with buttermilk and broke up corn bread in it. Each child that was big enough to stand was given a cockle shell to get their something to eat out of the trough." Mollie Edmonds of Mississippi

Andrew was born about 1856 in Mississippi per the census records. In 1870, he was 14 years old living in the household of his father James Gustavus, a farmer. James and his family plus two adult sons and their families were living as neighbors.

James married Sarah Macon, 30 Apr 1874, in Copiah County. Sarah is probably a second wife and not the mother of Andrew. There is an eight year gap between Andrew and the next child in the household.

Andrew's father, James, was described as a brick mason on the 1880 census. Father and son were neighbors. Andrew was living in the house with his sister Nancy and her children. All members of the family indicated their birthplace was Mississippi. In the previous census, James and Sarah listed their birthplace as South Carolina.

Andrew and his father were both listed on the 1880 agriculture schedule as farmers, both renting the land with their own tools. Andrew rented 25 acres from William L Shelby near Heaths Store in rural Copiah County, Mississippi. Andrew had a mule and horse, 3 calves were born. He raised pigs and chickens. He made 50 lbs of butter, grew corn, cotton, Irish and sweet potatoes. Andrew's farm was productive.

Did Andrew remain a farmer, marry, have a family? To be continue on next post.

Wordless Wednesday Christmas 1920s II
Posted by LindaRe at 11:29 AM