This is a tax receipt from Prentiss and Jane Buie in Caseyville, Lincoln County, Mississippi, of the men who were tenant farmers on their land. Most of the men listed were enslaved by the Buie family. The receipt was found in the personal papers of the Buie family. A date was not shown nor what the numbers next to the name means. The only explanation given was that this was a tax receipt. It was written before 1906, the year Jane Buie died. 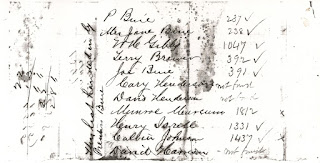