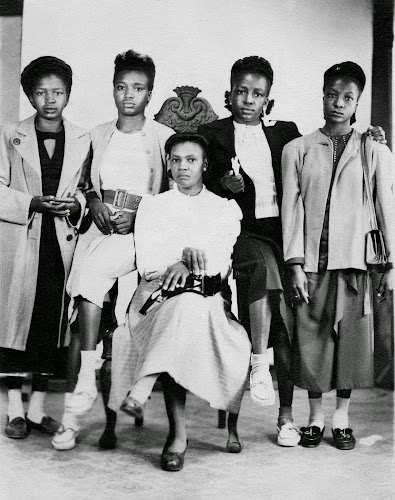 Fannie Thomas Scott and her daughters: Pearline, Fannie, Gladys, and Margie.
Photograph taken during the late 1940s or early 1950s.
Lincoln County, Mississippi
How are they related to me?
The daughters' father James Pearly Scott, Jr., was the son of James Pearly Scott and Catherine Matilda Markham.
Catherine and my great grandfather Monroe Markham were siblings.
The daughters and I are second cousins once removed. 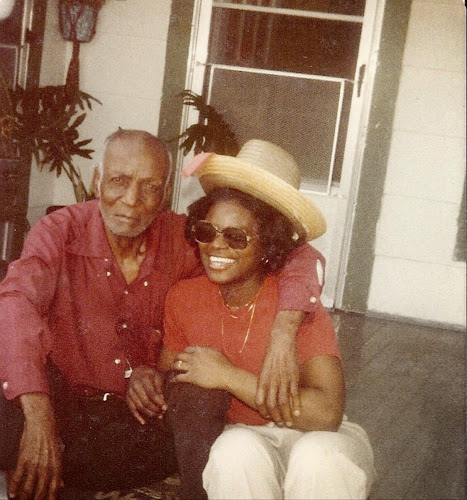 Frank Scott was the grandfather of Lorraine Thomas Bolton.
Frank was the son of James Pearlie Scott and Catherine Matilda Markham
Lorraine is the daughter of Nathaniel Thomas, Sr., and Annie Mae Scott.

Both are my maternal cousins. 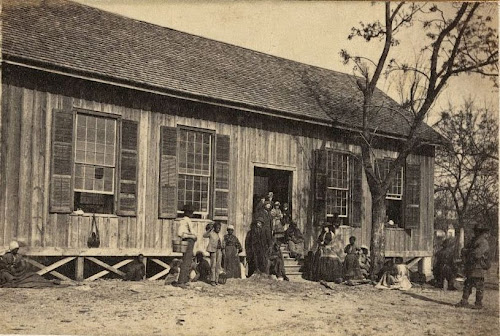 Freedmen's School
Edisto Island, SC
The Freedmen's Bureau helped to establish Mississippi’s first widespead public schools and laid the foundation for public education. Freedmen desired education for their children and adults wanted night schools so they too could learn to read and write. Below is a letter written by a teacher asking for protection from violence from local citizens.

Dear Sir,
I have the honor to report that I was sent here by H. R. Pease, Esq, Gen Supt of Education for the State of Miss to open a scholl(sp) for the Freedmen. I have already a very good day scholl(sp) & could get a night school for the grown persons as they are very anxious for it but they are afraid to attend a night school from the threat made by many citizens here, "that if such a school is started, that they will fire into said school after night." Sworn statements can be had of the names of many of threatening parties as the Freedmen are all anxious that the school should be carried on. I would be much obliged to you, if you would inform me if there can be any protection afforded myself & scholars from violence & outrage from the threatening parties unless some means is devised, the school must be abandoned, as the freedmen are in bodily fear. 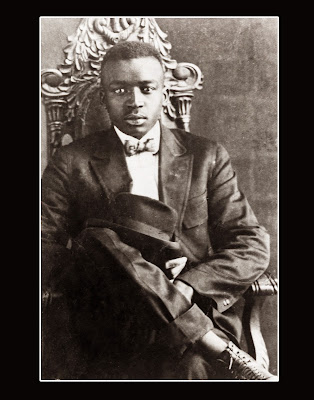 How does Pearlie connect to my family?
His mother Catherine Matilda Markham Scott, and my great grandfather Monroe Markham were siblings.

The writer of the letter, Maria Louisa Baxter Burnley, wrote to the Freedmen's Bureau Field Officer concerning reparations for her dead mare and mules, and blinded ox. She implied the freedmen working for her intentionally harmed the animals.

Maria Burnley was the wife of Edwin Burnley. The couple married in 1852, together they had five daughters: Jean, Hardenia, Fannie, Bertha, and Edwina. Jeanie died before the writing of this letter. They owned Somerset Plantation in Copiah County, Mississippi, with 60 slaves.

Somerset Plantation's acreage is shaded in pink on the map below. 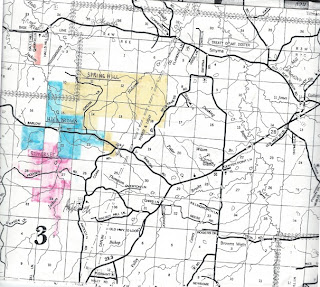 To his excellency General

Sir
Knowing it to be your desire to redress grievances in the district under your command, I have taken the liberty to address you, begging your advice or directions.

I will first state that before the War my husband owned about one hundred svts mostly his family servants & one valuable cotton plantation in Madison Parish La - on which during the war, the Southern soldiers burned near four hundred bales of cotton with corn, new gin house, steam engine & ? not giving even two hours to save the buildings - that with the mules they took has reduced us to poverty - my husband by an attack of apoplexy has been incapacitated to attend business since the war - & seldom leaves the house.
From Edwina Burnley Memoirs: There were 1300 acres across the river from Vicksburg in Madison Parish, La., on Jo’s Bayou not far from the little town of Delhi. Bro William managed the place but Pa went over several times a year. Jo’s Bayou was a valuable plantation, finely equipped, Pa refused $100,000 for it just before the war. Just before the fall of Vicksburg our own soldiers burned one year’s crop to keep the Yankee’s from getting it – 300 bales of cotton and unnumbered bushels of corn.

This year & last we have employed freedmen, but they have not made enough to feed themselves & teams & they only work when they choose.

However after these preliminaries which I deemed necessary as an apology for troubling you, I will state that my chief object is to inquire of yourself if there can be any redress for the cruelty of the freedmen to the animals under their care.

Now Sir, by stating in what way these cruelties can be prevented you will not only greatly oblige - your humble petitioner (who can ill afford to lose even one animal) but show an act of real kindness to those domestic animals who God has given us to care for & protect.

P.S. May I beg this petition may receive your attention as I am obliged to employ freedmen inasmuch as I have four little daughters to support & no one to attend to any business but myself.

How is Somerset connected to my family?
Virgina Williams/Taylor was a slave of Somerset. She married John T Demyers, my 2nd great grandmother Alice Demyers Overton Usher's brother. The Burnley family also owned an Overton family whose connection to my 2nd great grandfather, Dave Brown Overton, is unclear.