Hystercine Gray Rankin was ten years old when she heard four gunshots while retrieving water from the pond. She thought it was hunters in the woods but the shots heard had killed her father. Denver Gray had been murdered by the owner of the land where he was a tenant farmer. Gray laid in the road until the log truck came to pick him up.

Quilting was taught to Hystercine by her maternal grandmother. Hystercine was recognized for her quilts by the National Heritage Fellowship. She used quilt making to capture her experiences growing up in rural Mississippi. Below is a scene from the day of her father's funeral. 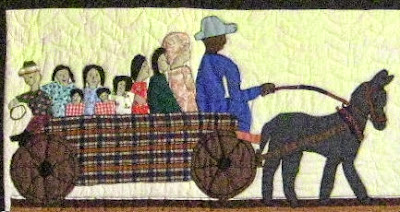 "The day of my father Denver Gray's funeral was also the day we left Union Church. My Grandmother, Alice Whalem, moved us to the Blue Hill community To live with her father, Joe January, who was born a slave and later bought 100 acres of the land he was a slave on, and built a very large house there in 1890. He died in 1941 I moved in 1946, when I married Ezekiel Rankin, a staff sargent [sic] in the US Army. My Grandmother died in 1943 and my Mother Brothers And Sisters continued to live with my great uncle Lovie January My Mother Laula Gray died in 1950 of Cancer." Hystercine Rankin
The Full Quilt

Mr. Farrell Humphreys who owns and operates a farm property on Highway 20 about 15 miles east of Fayette shot and killed a negro tenant on his place about seven o'clock Monday evening, April 3, The negro, Denver Gray, about 38 years of age, and Mr. Humphreys had been having tenant and landlord differences for several days prior to the difficulty that resulted in the killing.

Mr. Humphreys gave himself up to the Sheriff's office, waived preliminary hearing and was admitted to bail to await grand jury investigation. Several witnesses are reported to have seen and heard all that passed between the two men at the time of the shooting.

The Chronicle has heard no detailed statement of the trouble that caused the tragedy.

Denver Gray was the son of Walter Gray and Gaule Williams. He was born March 27, 1905, near Union Church, Jefferson County, Mississippi. He married Laula Meeks/Mix, daughter of Alex and Alice January Whalum. 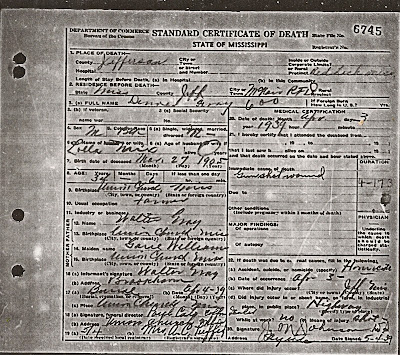