Servants Have Boils and Risings - 1861 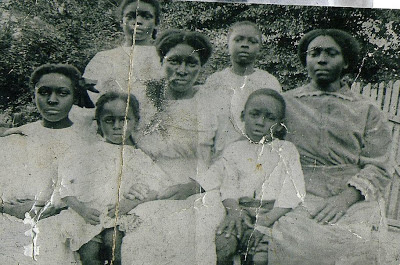 The Great Grandchildren of Patience Bradley

The mistress of Spring Hill Plantation, Sarah Frances Adams Taliaferro, wrote a newsy letter to her son Henry during the first year of the Civil War. Below is an excerpt from that letter mentioning the servants and their suffering with boils and risings. A boil is a painful, pus-filled bump under the skin caused by infected, inflamed hair follicles.

"We are getting on now pretty well picking cotton but have been much hindered by the servants having boils & risings. Edmond has had his hand in a sling for 6 weeks - Rachel and Gilmer have done nothing for 2 months - Patience with one finger - Sam with sore back - no fevers or chills on the place the whole summer - the cotton is indifferent they say it is rotten in the bolls."

Sarah Frances was married to Peachy Ridgway Taliaferro of Copiah County, Mississippi. After his death in 1852, she was allotted several slaves including the ones mentioned in the letter. Edmund was appraised at $1500, Rachael $1000, Gilmer $1300, Patience $600, and Sam $700.

Patience, along with her husband Arthur, and five of their children were also named on Peachy R Taliaferro's probate records. 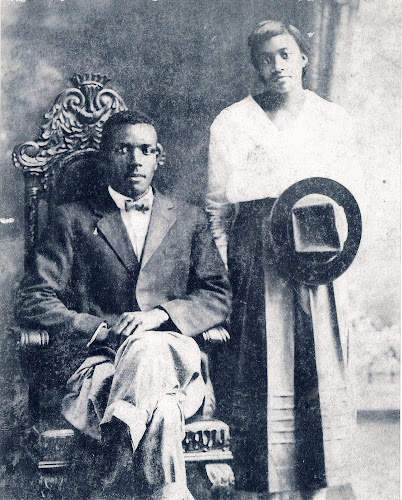 Annie's husband Lamar was murdered on the crowded lawn of the Lincoln County courthouse, on 13 Aug 1955, for encouraging African Americans to vote by absentee ballot.

Finding a woman's maiden surname can be confusing if the woman has unknown marriages. What was the maiden surname for Lamar Smith's wife Annie? Take a look at what was found.

Annie was born, Jan 1890, to George Clark and Delphinia Culver. In 1900, ten years old Annie was living with her parents, widowed sister Lizzie Lyons and her two children. Annie could read and write, and the family lived on a rented farm in Caseyville, Lincoln County, Mississippi.

Annie was a Christmas bride. She married Lee (Leiguil) Holloway, 24 Dec 1908, in Lincoln County. In 1910, the young couple rented farm land from Lee's parents, George and Manda Holloway. A son, Willie, was born to the couple on 22 May 1912. 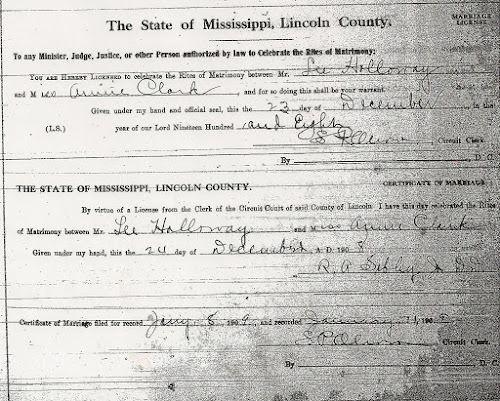 The marriage ended before the beginning of the next decade, how, I don't know. A death certificate for Lee was not found.

Anna Holloway married Lamar Smith, 26 Oct 1919, in Lincoln County after he was discharged from service in World War I. Lamar and Annie were living alone in 1920, still in Caseyville, on land they owned and farmed. The family remained in Caseyville through 1940 per census records. 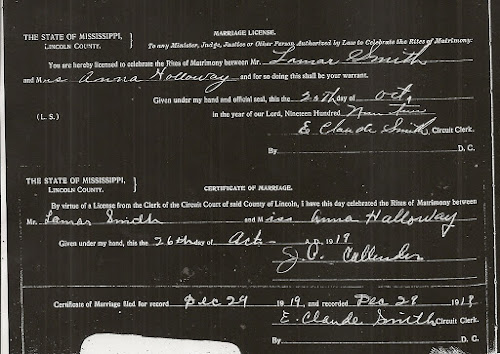 The couple remained together until his death. Annie died 27 Jun 1984. They both are buried in the Mount Carmel Cemetery of Caseyville, MS.

Thank You, Willie
Posted by LindaRe at 9:47 PM 4 comments: 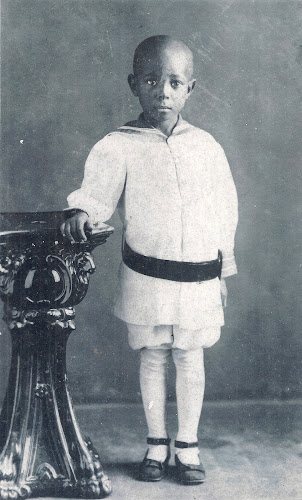 This picture was found in the collection of my great grandmother Mary Byrd Markham of Lincoln County, Mississippi. The boy is likely a relative but I don't know his name.
Posted by LindaRe at 8:34 AM 6 comments: