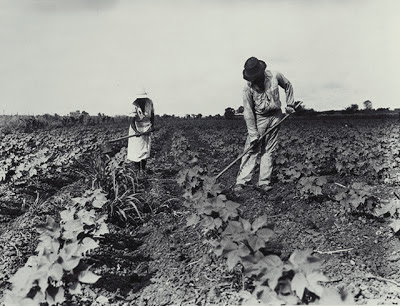 It's a boy, the second son, and second child for Monroe Markham and his wife Mary. John Markham was born about 1875 in rural Lincoln County, Mississippi. The first Kentucky Derby was held in 1875, an event in which the parents likely had little interest, and several African Americans were killed in terrorist attacks in Vickburg, an event that likely held the attention of John's parents.

On the 1880 census, John was listed as 6 years old. He was in the household with his parents, and brothers James, Joseph, and Buddy (Octavius). He was listed on the 1892 Lincoln County Children's List as 16 years of age, and he could read and write. Relatives said he was good with numbers. He married Ida Blue during the holiday season on 31 Dec 1896. Ida was the daughter of John Blue and Amanda English.

Dysfunctional behavior is common in families. What I am about to share is common knowledge within the family but just in case you meet someone who does not know the story, you can keep this between you, me, and the gatepost.

In 1900, John, his wife Ida, and their two young children Samuel and Arlynch lived with his parents-in-law, along with other relatives. Clara Blue was in that 1900 household as a 9-year-old. She is listed as a niece to the head of the family John Blue. Relatives have said she was the daughter of John Blue. No matter the relationship between Clara and John Blue, John Markham had an illicit relationship with his wife's 13/14-year-old relative. This relationship produced a son and damaged the bridge between John and his parents.

Between 1910 and 1930, John's family with his wife grew with seven children, mostly girls as is common in Markham men households, five daughters, and two sons. His wife Ida died in 1934. 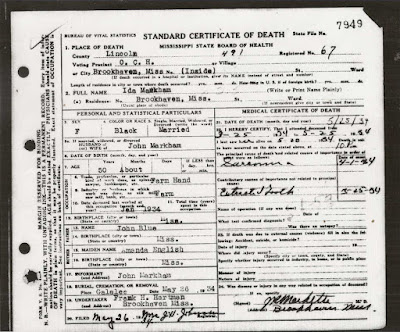 John was a preacher and made his living as a tenant farming, working the land he rented. He was tending his fields one comfortable autumn day in October 1937 when he noticed a funeral processional going toward Galilee AME Church. When he questioned out loud a fellow worker, whose funeral was to be held at the church. The worker told him, "that's your Ma." 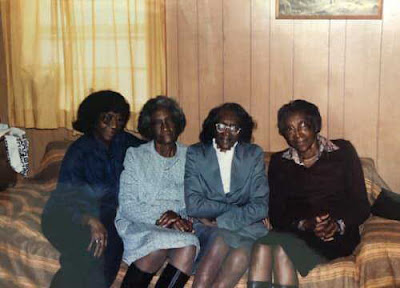 Virgil was not raised by either of his parents. Asiome and Carrie Smith, an aunt and uncle per census records, raised Virgil. 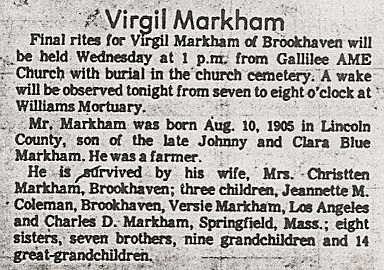 John did not remarry and remained in Lincoln County, Mississippi, where he died 02 Feb 1959, of hypertensive heart disease. 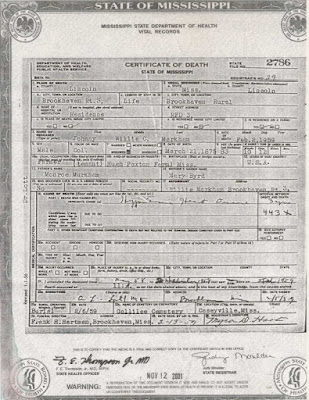