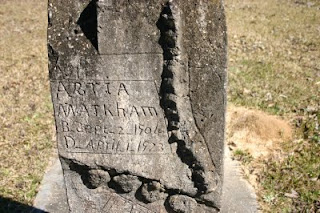 From all reports received of the occurrence, which Sheriff R. C. Applewhite is not satisfied with until it is investigated still further, witnesses having already been summoned into Brookhaven. Markham who was 19 years old had been out late with a couple of friends, all of them riding horses. When he and his friends reached the Homochitto Bridge, it is said that Markham dismounted and when he attempted to mount his horse, a pistol which he was carrying, fell out of his pocket, discharged and killed him, almost instantly.

Cousins last saw Asirah mounting his horse with friends to go do what young men do after Sunday church service, visit girls. The rumor in the family is Asirah was murdered by one of the riders because they were both interested in the same girl. Supposedly, the girl was more interest in Asirah than his riding companion. Neighbor Henry Davis rode through the neighborhood notifying relatives of Asirah's death.

Asirah Markham was the son of James Markham and Anna Culver. Asirah was my mother's first cousin.