So Proud of Edmund Baker 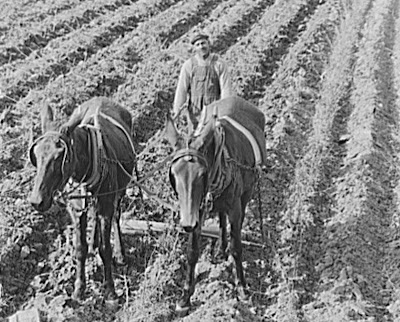 Farming Near Tupelo, Mississippi
Photograph Courtesy of Library of Congress

The Civil War brought devastation to the area where my ancestors lived. They lived in small villages, towns between Union occupied Natchez and Vicksburg. The Federal armies took what they needed from the farms and in some cases destroyed what they could not take. Southern Commissions depositions, letters, federal pension depositions, slave narratives gave accounts of the military actions in the area. All that was left, hidden or had been squirreled away was what the folks had for survival.

I can imagine my people discussing the future. I know they dreamed of owning land, land to make their living. They were skilled in making the land prosperous for their former masters and I am sure they looked forward to working for self. There was plenty of work in an agriculture economy and they were to be paid for their labor.

Edmund Baker was born about 1810 in Kentucky, described as a mulatto, His wife Mary was described as a large woman and very religious. The couple was not seen in the census records living together. In 1870, they were living as next door neighbors on the Somerset Plantation. Edwina Burnley wrote in her memoirs that Edmund was the only slave who never left the plantation.

Two of Edmund's three children had returned home by 1870, Wilson and Elijah. Julia who should be about 18 is not with the family. She may be married, dead or left the area. Elijah married Lucinda Smith in 1873 and settled in Lincoln County, MS. Wilson married Betsy and remained in Copiah County, both became farmers. The 1900 census is the last census for Edmund Baker. He was a widower living alone tho Mary the mother of his children was still alive. Mary was alive in 1910, no record for her in 1920.

Wilson died August 15, 1919 in Copiah County of dropsy. His was the only death record found for the family of five.

I hope the descendants of Edmund Baker discover his story so his name can be remembered.