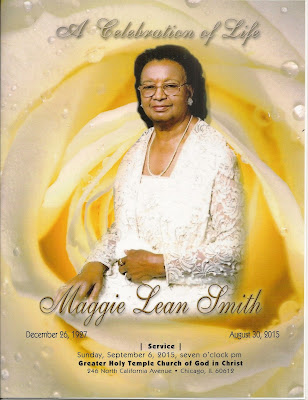 Maggie Lean Scott was born on December 26, 1927, in Caseyville, Lincoln County, Mississippi. She was the first born child of Rev Perlie Scott and Fannie Thomas Scott. Zion Chapel AME Church was where the family worshiped. The church also served as one of the elementary schools of the community. As a rural farming area, Caseyville children could only go so far educationally. In her early years, the family joined the Triumph Holiness Church where her father became a minster and later the pastor.

At the age of 16, she married her childhood friend and neighbor, Robert Lee Smith. She recounted that as they played together as little children, Robert would pull her hair and say to her, "When we get grown, I'm gonna marry you." After marriage, they moved 40 miles away to Natchez, Mississippi, where they lived, worked and purchased a home. Maggie worked as a domestic housekeeper and cooked at a local restaurant while Robert worked at a mill. No children were born to this union, but many sisters, nieces and nephews "married out of their house." They were a couple who totally loved, honored and took care of each other. They ere friends from childhood to the end.

In 1953, Robert and Maggie moved from Natchez to Racine, Wisconsin, where they lived and worked until moving to Chicago. In the Windy City, Maggie worked at various jobs in the shoe and garment industries. Later she worked at Allied Radio and then at the Mason Elementary School (Chicago Public Schools) from which she retired.

In 1954, Maggie joined Holy Temple Church of God in Christ under the pastorate of Bishop E Lenox. She served the congregation in many capacities including kitchen coordinator and chairperson of the beautifying committee. Sister Maggie, as she was called, was also instrumental in the establishment of a fund to assist and aid assistant pastor, Elder Ardail Allen, who was gravely ill, and his family. This support continued several years after his death.

Sister Smith remained active and loyal to the church throughout the ministries of Pastor James E Lenox and Pastor Lamont Lenox. While unable to regularly attend church services due to illness in the last few years of her life, she continued to faithfully pay her tithes and fervently pray for her pastor and the entire congregation.

One of her greatest passion was working in her community on Chicago's west side. She served as the President of the 4200 West Cullerton Block Club Council. As a dedicated community activist, she initiated and participated in countless activities ti improve her neighborhood and beyond. Maggie Smith worked diligently for the campaign to elect her godson, the later Alderman Jessie Miller to the Chicago City Council. Her heartfelt love and concern for family, church, and community was evident in her words, thoughts and deeds. Her loving presence will bee missed.