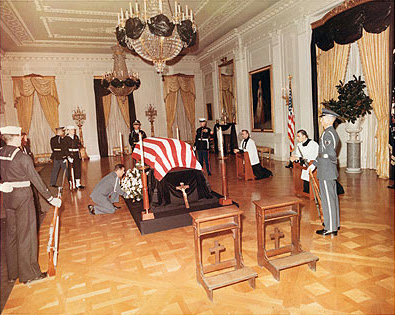 A few memories of 1963 comes to my mind rather easy. It was the year my brother James was born, the year my paternal grandmother, who we lived with, had a heart attack that left her frail. I don't have memories of the March on Washington or the Birmingham church bombing where four little girls was murdered but I do remember the day JFK was assassinated.

I was a second grade student at Westside School in Jackson, MS, seven years old, just a few days shy of my eight birthday. My teacher was Mrs Anthony, a stern, strict teacher. It was a cloudy day, cool enough for a jacket.

It begun as a typical school day. Lillie Ann was late for school which was the norm. We had eaten lunch, busy at our desks. I remember one of the teachers quickly coming in whispering something to Mrs Anthony. Another teacher entering the room during class time was unusual. Nothing was said and we continued with our work. Minutes later, the teacher returned and beckon Mrs Anthony to come outside the classroom into the hall. Mrs Anthony returned to her desk, head down, and both hands over her mouth and the lower part of her face. 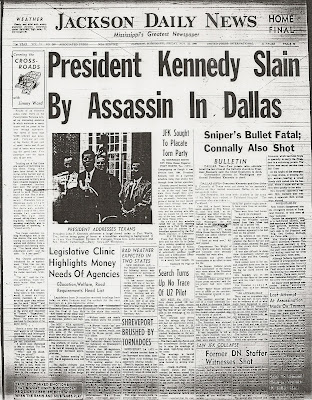 We knew something was wrong but couldn't imagine what. Mrs Anthony told us what had happened and some of us cried, I cried because Mrs Anthony was crying. We were sent home early. I was eager to get home to tell my mother who met me at the door and told me to be quite. The family had decided to delay telling my grandmother of the President's death until my Aunt Rosie was ready to tell her.

We couldn't turn on the TV, fearful my grandmother might hear the news, so we listen quietly to a small radio on our side of the duplex. I think my grandmother was told late Saturday night or Sunday morning because I remember watching TV the day before I returned to school.

Teachers brought TVs to school and we watched the funeral that Monday. I can still remember the sounds of the horses hoofs against the pavement, and the marching soldiers, the cannons. I can see Mrs Kennedy face draped in the black veil, Caroline and John dressed in light blue with their red shoes, the coffin draped in the flag.

Sadness everywhere. The pain of that day is still with me. Watching snippets of film brings the sadness back.

I came of age during the early 70s in which almost every home I was familiar with had a picture on the wall of MLK, JFK, along with Jesus. For the African American community, they were our hope.