The horror of the brothers' deaths first came to my attention from this blog post, A Brookhaven, Mississippi, Lynching, where the author shares his father's memories of the lynching. I had not heard of the lynching but was curious to learn more about the two brothers.

They were the sons of John Bearden and Doshia/Dosie/Docie McGowan. Both brothers were born and raised in Lincoln County, Mississippi. The family roots were also in Lawrence and Pike counties, MS. 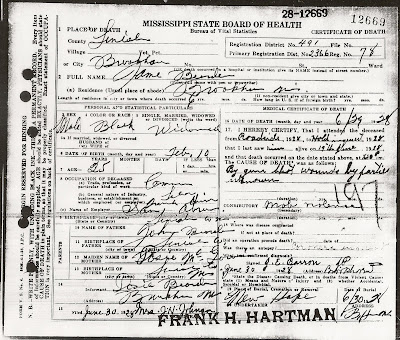 James was born, 10 Feb 1903. He is not seen in the census records with his parents under the name James. I suspect he may be known as Pearlie by family. He could not read or write, worked on the farm his father owned and for Samuel Abrams who owned a grocery store. In 1910, he was 8 years of age; 1920, 18 years. He married Eliza Robins, daughter of Will Robins, in 1923. She died, 18 Jun 1928, a few days prior to her husband's death of tuberculosis of the lungs. The couple had one child.

James owed Caby Byrnes a $6 bill, which is what sparked that day's event. James died, in front of his brother Stanley, from gun shots wounds, supposedly by parties unknown. 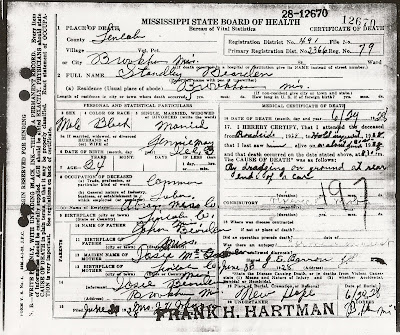 James and Stanley returned to discuss the debt with Byrnes. James was "extremely imprudent" to Byrnes who then hit James in the face with his fist. Fights between the Bearden and Byrnes brothers resulted in Stanley being dragged on the ground at the rear end of a car to his death, again supposedly by parties unknown.

What happen to the family after the brothers' deaths.

The family left Lincoln County after the deaths. Per the 1930 census records, the brothers' father John Bearden was deceased. Their mother Docia was living in LaSalle Parish, Louisiana, with her sons Ogey and Estus. Docia was living with son Estus, in 1940, Hattiesburg, Forrest County, Mississippi. Docie was alive in 1954, living in Hattiesburg.