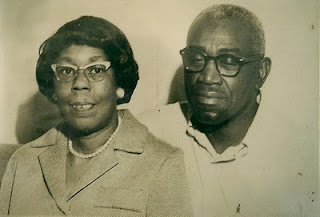 Allie and John Henry Moncrief
Cousin Allie Markham Moncrief started school when she was four years old at the Mount Carmel African Methodist Episcopal Church in 1916. She remembers her first day of school well. Her mother had taught her to memorize the alphabet which she could not identify. Once the teacher cousin Ollie Hilliard McClain discovered Allie could not identify her alphabets, she requested Allie stay inside during dinner recess. Allie disobeyed, eager to eat her dinner of spare ribs, biscuits, cookies, and sweet potatoes. Once Miss Ollie discovered Allie was missing, she called her back. Crying, snot running, Allie obeyed and learned to identify her alphabets to the satisfaction of her teacher. She did eat her dinner after the other children had returned to the class.

Allie's received her first eight years of schooling in one room churches, Mount Carmel, Mount Pisgah and the Galilee sponsored Search Light one room school. All of the churches were African Methodist Episcopal Churches.