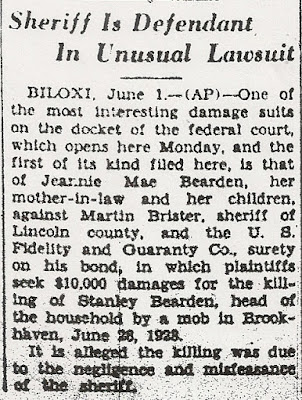 Sheriff Is Defendant in Unusual Lawsuit

One of the most interesting damage suits on the docket of the federal court, which opens here Monday, and the first of its kind filed here, is that of Jeannie Mae Bearden, her mother-in-law and her children, against Martin Brister, sheriff of Lincoln county, and the U. S. Fidelity and Guaranty Co., surety on his bond, in which plaintiffs seek $10,000 damages for the killing of Stanley Bearden, head of the household by a mob in Brookhaven, June 28, 1928.

It is alleged the killing was due to the negligence and misfeasance of the sheriff.

The case resulted in a nonsuit after the plaintiffs, before trial, announced they desired this step to be taken.

Nonsuit is a ruling by the judge in a lawsuit either when the plaintiff (the party who filed the suit) does not proceed to trial at the appointed time or has presented all his/her/its evidence and, in the judge's opinion, there is no evidence which could prove the plaintiff's case. A nonsuit terminates the trial at that point, and results in a dismissal of the plaintiff's case and judgment for the defendant.