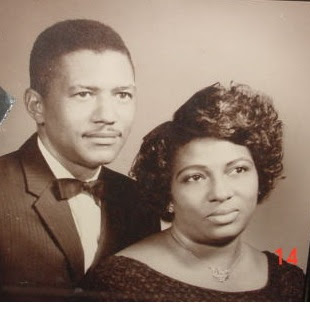 Busy this afternoon looking at pictures Cousin Nate emailed me before the holidays. It was nice to see a picture of Cousin Odessa Banks, daughter of Archie and Janie Scott Banks. I had no idea who she married so it was an extra bonus to get a name and photo of her husband. His name, Calvin Lowe, was not on my family tree but his parents were, Robert Lowe and Dezine Kelly. Robert's siblings Fannie and John married into my extended family.

I do what I call community research but I think the correct name for it is cluster research, which is researching extended family members, friends and neighbors of direct relatives. The Lowe family was from Union Church, MS, a neighboring village to the family home place, Caseyville, MS. The Lowe families connected to my tree descend from Eveline Lowe born about 1830 in Virginia.

Cousin Odessa was born about 1927 which lead me to the 1930 and 1940 censuses searching for her husband. In 1930, Calvin was a 7 year old in the household of his parents with his siblings, Euniemay, Hudie Mann, Willis, Chalmers, Jessie May, and Marie. In 1940, everyone except Euniemay is still in the household. I found a family group sheet that a cousin sent confirming the names of Calvin's parents.

Calvin is the son of Robert Lowe and Dezine Kelly
grandson of Lewis Lowe and Amanda Johnson, Calvin Kelly and Harriet Reed

Odessa is the daughter of Archie Banks and Jannie Scott
granddaughter of Joseph Banks and Mary ?, James Pearly Scott and Mary Viola Markham
Odessa is my mother's half 2nd cousin.