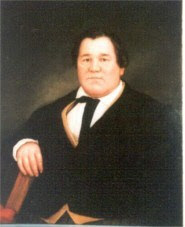 Obituary written by a relative of Taliaferro, Albert Gallatin Brown, an extreme pro-slavery supporter. In my opinion, he exaggerated the grief of Taliferro's slaves. My 3rd great grandmother's daughter Mary P Winston was owned by Taliaferro.

Died at his residence, in Copiah county, Mississippi, on the 12th ins., after a painful illness of twelve days. Peachy R. Taliaferro, in the 47th year of his age.

Mr. Taliaferro was a native of Orange county, Virginia. At an early age he intermarried with Sarah Frances, the accomplished daughter of the late Thomas B. Adams, of Fredericksburg, Virginia. Following the inclinations of a naturally ambitious and enterprising disposition he emigrated to Alabama and after a short residence there removed to Mississippi and settled on the estate where he died. His house became the seat of hospitality. Enterprise aided by a quick and accurate judgement enable him to accumulate an ample fortune, and he dispensed his hospitalities(sp) and his charities in a manner altogether worthy of a Virginia gentleman. Ardent in his temper he was quick to resent an injury, and always ready to accept the profered(sp) hand of reconciliation.

In all the relations of life, as husband, father, master and friend he was affectionate, indulgent, kind and generous. Full of resentment towards those who had wronged or injured him, he was always quick to forget and forgive. And when once reconciled he never allowed a past difficulty to be revived by unnecessary recurrences. Sincerity was prized by him above all other qualities of the heart, and he would have no intercourse with those who practised(sp) deceit.

Mr. Taliaferro was connected with the Virginia family of the same name. His mother was a Gilmer and he was a cousin of Governor Gilmer of Georgia and the late Secretary Gilmer. The Peachy, Grattens and Taylors of Virginia, are his connexions(sp) by marriage or blood relationships. He inherited from his ancestors that political zeal which has made so many of his family distinguished--but he was not ambitious. Always active and efficent in elections he was never himself a candidate for any office.

In the death of P. R. Taliaferro the community in which he lived has lost one of its most enterprising and useful members--society a convival(sp) and cheerful spirit; the sick, the poor, and the distressed a friend who always helped with a liberal hand. To his bereaved wife and children his death is a terrible calamity and the rose were entwined in beautiful companionship. it falls like a mighty avalanche crushing the heart of his doting wife and shocking the minds of his affectionate children.

The true qualities of this good man's heart were conspicuously manifested in the treatment of his slaves. The best commentary is a simple statement of the fact that when his death was announced his servants, old and young, of whom he had a large number, wept in all the bitterness of heartfelt grief. In tears they followed his remains to the tomb and at a late hour of the night many of them lingered around his grave refusing to be comforted, for as they said they had lost their dearest earthly friend.

In politics Mr. Taliaferro was a Democrat of the Jeffersonian school, ardently devoted to the rights of the States, and in the late Mississippi canvass he voted with the State Rights party, and earnestly advocated their cause. His cool head and clear judgement convinced him that the rights of the States, were inseparable from the perpetuity of the government, and hence he claimed to be a Union Man. B