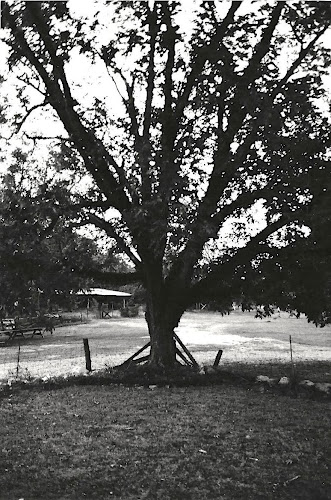 A pecan tree on the land where Isaiah lived.
Photograph courtesy of Beverley Ballantine, Nov 1999

The name Isaiah means "the salvation of the Lord," He was the first born son of parents recently freed. I wonder if the parents knew the meaning of the name. Isaiah was born about 1867 in Copiah County, Mississippi.

His parents were John T Demyers and Virginia Williams/Taylor. Isaiah's father John lived next door to Hezekiah George David Brown per the 1870 census, a slave owner of the family. I believe the Demyers family was first owned by Peachy R Taliaferro. After HGDBrown's marriage to Peachy's daughter Mary Peachy Taliaferro, my family was split and some members went to live on HGDBrown's Lucky Hit Plantation. Isaiah's mother Virginia was a slave on the neighboring Edwin Burnley's Somerset Plantation.

The Demyers' household was filled with people. The couple raised the children of John's deceased sister and two sets of grandchildren. Census records described nephews/nieces and grandchildren as sons and daughters. Isaiah had five siblings but I am sure of only three of their names: Amanda, John Jr., and Dora and the other two may be Henry and Willie.

Isaiah, 10 years old, was listed on the 1878 Copiah Educable Children Lists. Per the census records he could read and write.

John and Virginia Demyers, Isaiah's parents purchased 200 acres of land in Copiah County from S. Kemp in 1890. Isaiah lived with his parents for much of his life

Isaiah married Lizzie Bonner 22 Dec 1887. By the 1900 census, the couple was divorced. Lizze was living alone and Isaiah was in his parent's household. The census record said Lizzie had two children, one living.

Matilda Stackhouse Matthews was living a few doors from Isaiah. She was the widow of Charles Matthews with a young daughter, Maybelle. Matilda and Isaiah married during the Christmas holidays, 24 Dec 1902. The couple had four children: Ellison, Dora, Josephine, and Eula Mae.

The patriarch of the family, John T Demyers, died between December 1909 and April 1910. Per John's 1909 will, he left one third of his property to his only surviving child Isaiah. Isaiah would enjoy the fruits of his parents' labor for just a few years. He died in 1916 of pneumonia.

How does Isaiah connect to my family tree?
My 2nd great grandmother Alice Demyers Overton Usher's brother
John T Demyers had a son who was Isaiah Demyers.

Death Certificate for Isaiah Demyers
Posted by LindaRe at 7:35 PM