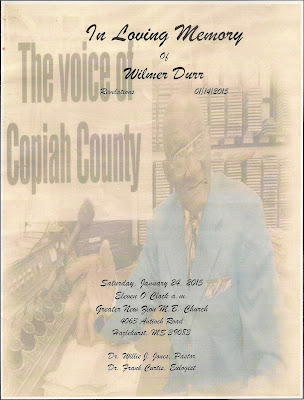 On Wednesday, January 14, 12:40 p.m. at the University Medical Center in Jackson, MS, God saw that the hills were getting harder and harder to climb. He gently closed Wilmer's loving eyes, and whispered softly, come home my child.

Wilmer served in the United States Navy. After returning from the Navy, he furthered his education at the Antioch Baptist Church. He worked numerous jobs, Britts Motor Company, Hazlehurst Public Schools as a bus driver, Hardy Wilson Memorial Hospital where he retired as an orderly. Wilmer was a spiritual DJ for 50+ years at WMDC and WOEG radio stations in Hazlehurst. He also managed and organized the gospel group known as the Christian Travelers.

Wilmer was born about 1920 per census records.

How does Wilmer connect to my family tree?
Wilmer and my paternal grandfather, Mike Durr, were brothers.