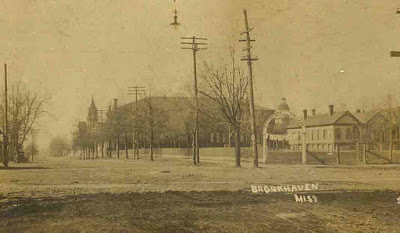 An argument over a debt of six dollars between James Bearden and Caby Brynes quickly escalated, ending in the deaths of two brothers, James and Stanley Bearden who were lynched by mob violence on 29 Jun 1928, in Brookhaven, Mississippi.

Caby Byrnes was born`22 Jul 1897, son of William Reese Byrne and Laura Criscoe, all Mississippians. He and his family remained in Brookhaven after the lynchings. Caby was the proprietor of an auto repair shop, his wife Mary Ford Byrne was the bookkeeper for the business. The couple had at least two children, Virginia and Caby, Jr. The senior Caby died 16 Sep 1955 and is buried in the Rosehill Cemetery, Brookhaven, MS.

The following paragraph was published in the second printing of the local newspaper since the lynching of the brothers. There is nothing like green power, money, to make folk repentant.

W. D. Davis, the President (Brookhaven Chamber of Commerce) referred to the terrible affair of June 29, when the law was trampled under foot. He spoke of the affair with feeling, both of the deed itself and its consequences on the actors themselves, on society and on the good name of the county for law and order.