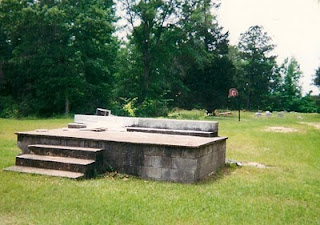 A childhood memory can be so vivid that the memory seems to have happen yesterday. Other memories are fragmented, a piece here and there, and you can't be sure if it is real to your own memory or if you remember because you remember what was told to you over and over. My paternal grandfather Mike Durr, Sr., died in 1960 when I was four years old. I have two memories connected to him, one the days following his death.

I remember his casket in my grandparents’ front room near the wall across from the fireplace, people coming and going, noise and silence. There is a vague memory of getting out of bed, seeing my grandmother sitting near his casket in a kerosene lit room. I remember people dressed in black and grandma's black hat. I remember the church where his funeral service was held, a white wood frame building resting on blocks and the church steps. Grandma held my hands as we walked up those steps. In my memory the steps were huge and it took effort to step up.

During the funeral I sat next to grandma and wonder why she was crying. I remember feeling restless and concerned about my grandmother, looking for my mother who was sitting behind us with my brother and baby sister in her arms. I can remember walking down the steps but nothing more. 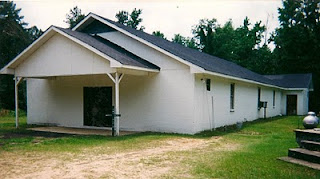 I suppose at some point during the day, I took a nap because I remember coming out of sleep in my grandparent's house. My first thought was of grandma crying. Why was she crying? I had to find her, talk to her. I remember looking for her, finding her. She was no longer dressed in black. I asked her why she was crying. I can still see her face, hear her gentle voice. She told me that she was sad because she would never see grandpa again and that she would miss him. I don't think I understood what she was saying to me but I did understand that there was a reason for the crying.

Grandpa was a member of Mercy Seat AME Church in Copiah County, Mississippi. It was his childhood church. Most of his adult life was outside the church but when old age had its gripe, he went back and was a member in good standing at the time of his death. He is buried in an unmarked grave in the church cemetery.
Posted by LindaRe at 11:45 AM