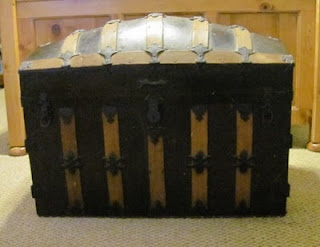 For the 100th edition of the Carnival of Genealogy, I decided to write about a family heirloom, my grandmother’s trunk.

Second great grandmother Alice Demyers Overton Usher raised many of her grandchildren including my grandmother, Gertrude Overton Durr. A forced sexual encounter resulted in pregnancy for Grandma Gert and if the family stories are true, Grandma Gert probably suffered with depression after the birth of her first child with no husband. Grandma Alice told her she couldn’t stay shut up in the house and that the first man to come along who wanted her, she would marry him.

Grandma Alice presented her granddaughter Gertrude with this trunk. It was a hope trunk, a hope in marriage. I never knew what was in my grandmother’s trunk when she married my Grandfather Mike Durr in September 1919. I would guess there was a quilt, bible, flour sack towels, pretty embroider pillow cases, a cup or two, and whatever they could gather for a new household.