Is the Light Red 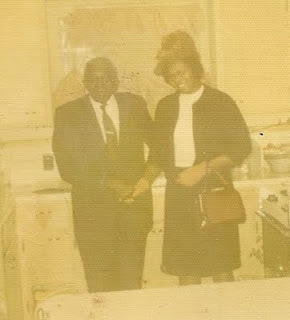 Uncle Scott was my favorite uncle. He was loving and kind, and my siblings and I loved being with him. It didn't matter if we were helping him to pull weeds from his garden or going to the store to buy two for a penny cookies we knew he would share, his company was golden. He was our ticket to the outside world, outside of Subdivision Number Two. He was a pentecostal preacher married to my Aunt Rosie. He loved singing and telling people about Jesus. Everyone, church goers and juke joint goers, enjoyed being in his presence.

If Uncle Scott invited us to go with him, we gladly went no matter where he was going. Glaucoma and diabetes slowly began to erode his vision but he continue to drive. I don't think the adults knew how bad his vision was, we children knew but didn't realize we were in danger riding with him.

As we would approach traffic lights, Uncle Scott would ask, is the light red. We would tell him the color of the traffic light and he would obey. Aunt Rosie finally realized his vision was too bad to be driving. She talked with our mother and told her not to allow us to ride with Uncle Scott. We were disappointed.

Between our mother saying no to his offers and Aunt Rosie telling him he shouldn't drive, he realized our days of riding with him were over. His feelings were hurt. We continued to spend time with him just not in the car. Shortly after we stopped riding with him, Uncle Scott stopped driving, Aunt Rosie learned how to drive or in her case, she learned to dodge ditches.

Aunt Rosie was my Dad's sister.