Not the Intention of Government to Give Land to Negroes ~ 1865 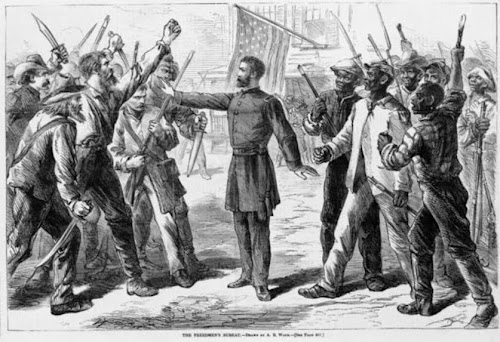 The Freedmen's Bureau had to squash the rumors of free land to former slaves and insure whites a Negro insurrection was not planned. Former slave owners feared an insurrection Christmas day 1865, to forcibly take the land.

Former slaves, in their new freedom, were encouraged by the Freedmen's Bureau to negotiate labor contract terms favorable to their interests.

Below is the Bureau's report from the area where my people lived.

Captain"
On account of the general feeling of uneasiness that has taken possession of the minds of most of the white people of this District in regard to a negro insurrection and on account of the movement which appears to be contemplated among the negroes of leaving their present places of employment and seeking work on the banks of the river, I think that it would be advisable that you call a meeting of all the negroes on some particular day in each of the counties of your Sub District and make a speech to them, explaining that it is not the intention of the govt that the land shall be divided among them: that the govt does not intend to support any of them that they must depend on their own exertions for a living and that it is their best plan to contract for work for next year speedily as possible

Explain to them that the contracts are subject to your approval; that you will not approve any that you do not think are to their interests, and that they can more readily obtain work where they now are, and upon more advantageous terms than they can by going to any other place

In short, endeavor to prevent a movement of the negroes of this district from the interior to the river.

At the same time let negroes and whites understand that you do not favor the forming of any contracts with parties who have failed to comply with contracts the past year.

These are mere general heads. The main thing is to have a meeting and explain to them such things as you may think they have wrong ideas about.

After each meeting, make a report of it and its probable results.