Will not Sell Lumber for a Radical's Coffin 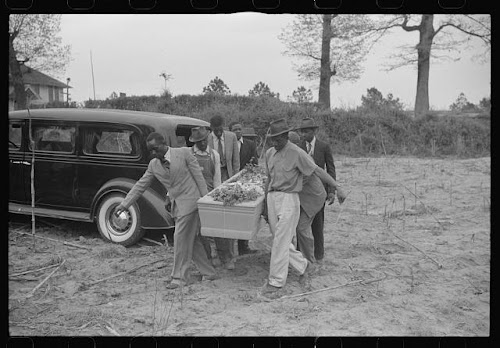 Freedmen's Bureau Field Office Records are disclosing that some folks don't like change, even death would not bring a compromise. Making the Negro an equal in the political, economic and legal system of America was too much for some to endure. In the eyes of Henry Maxwell, Elisha Massey was a Radical. When Massey died, Maxwell would not loan tools or sell lumber for Massey's coffin.

I didn't find why Massey was accused of being a Radical. Voting for a Republican or voicing an opinion of equal rights would have been enough to put him in the hot seat with his neighbors.

Read below how it was recorded in the Freedmen's Bureau records.
September 12 1868

Died Elisha Massey an old citizen, 78 years, of Lawrence Co., Miss. on Fair River about 1/2 way to Monticello died on the 4th inst.

Henry Maxwell also an old citizen refused to lend tools with which to make Massey a coffin because Massey was a radical & also refused to sell the lumber (having a sawmill) for the coffin.

These two men do not connect to my family.

Photograph Courtsey of Library of Congress