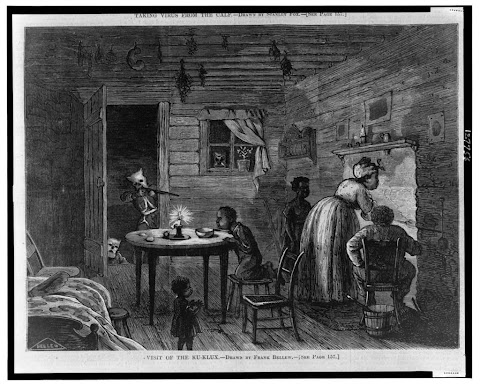 Reading accounts in the Freedmen's Bureau Field Office Records, for the area where my people lived, has revealed a pattern of firing folks close to harvest. If there was a valid reason for the firing or if the individual left without permission, they would not be paid per the rules established by the Freedmen's Bureau. Once the bulk of the work had been completed and the crop was near harvest, a thieving land owner could easily come up with a reason to fire his workers.

Esquire Thurston's case was different, the landowner he worked for didn't dismiss him. The "angels," who may had permission of the land owner, demanded Thurston leave. Thurston had worked from January to August. He probably wouldn't share in the harvest if he left, which is why he took his case to the Freedmen's Bureau.

In all cases of dismissal or voluntarily quitting plantations, the laborer forfeits all unpaid wages, and his family or dependents will be dismissed at the discretion of the manager.
Freedmen's Bureau Labor Contract Rules

The Ku Klux Klan was established around 1866. Their growth fed off white southerners resentment that centered on the Reconstruction programs imposed on the South by a Republican Congress.

Esquire Thurston col'd states & shows contract. He is at work for Thos W East on his (East's) farm in Copiah Co...8 miles from here between the Liberty & Gallaton Road & that on last Thursday night - a party of 5 calling themselves Angels came to his house (10 or 11 o'clock) & told him to leave. He could have one week to get away.

Esquire Thurston is not connected to my family.