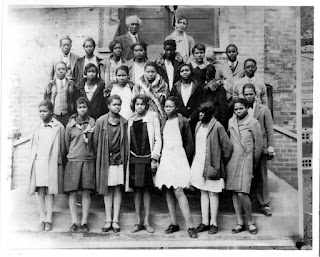 Professor Phillip Davenport Gullage is the gentleman on the top row. He was the principal of the Brookhaven Colored High School. This photograph was taken in 1931, the last graduating class of the school.

Prof. Phillip Davenport Gullage was born Simpson County Dec. 16th 1854 the community of Gum Springs on plantation of Mr. Will Gullage. At the age of 11 until 1872 he resided in Rankin County. His early education was received in Hazlehurst and Brandon and later attended summer normal schools at Tougaloo, Miss. He began teaching in 1877, at Little Rock, 7 miles from Hazlehurst. In 1891 he came to Brookhaven as Principal of the negro High School which place he held for 42 years. Owing to his advanced age he was replaced by a younger man but since has been teaching an adult class of the W.P.A. program. Gullage has been a very outstanding negro in his line of work. Very instrumental in securing Summer Normals for negroes in Brookhaven.
Slave Narratives - Mississippi - Federal Writers Project

On a previous post, those in the photograph were identified.
Photograph Courtesy of
Lincoln-Lawrence-Franklin Regional Library
100 S. Jackson St
Brookhaven, MS 39601
601-833-3369