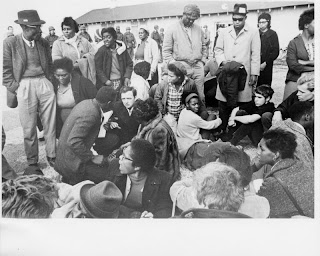 Greenville Airforce Base Sit-in, 1966
The Sovereignty Commission was created in March 1956 by an Act of the Mississippi Legislature, in reaction to the 1954 Supreme Court decision in Brown v Board of Education. The court ruled that laws enforcing segregated schools were unconstitutional and called for desegregation of schools. This ruling sent shock waves throughout the South. A remedy was needed to strengthen the Jim Crow laws of segregation, thus the commission was created to protect against federal enforcement of civil rights laws, and the United States Supreme Court rulings, to preserve segregation.

Thousands (87,000) of African Americans, white professionals, teachers, government workers, churches and community organizations who were thought to have involvement with civil rights groups were placed on the commission list. It informed police about planned marches or boycotts, voter registrations, and encouraged police harassment of those who participated. The commission harassed and spied on civil rights activists, branding many of them racial agitators and communist infiltrators.

Since Mississippi government created the agency, its leaders were state government officials. The commission consisted of 12 members. The governor, lieutenant governor, speaker of the House of Representatives and attorney general were members; each governor during existence of the commission served as chairman.

The commission officially closed in 1977, when then Governor William Waller vetoed funding.

I found several members of my family on the Commission list and plan to share what I found over the next few days. If you have Mississippi roots or a family member who came to Mississippi to participate in the Civil Rights movement, I suggest you search to see if a member of your family is named.

Here is the link to search online. Sovereignty Commission Online