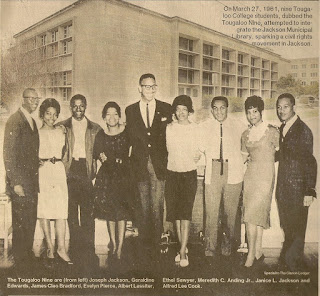 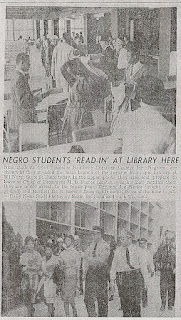 Myrlie Evers said of the Tougaloo Nine; "The change of tide in Mississippi began with the Tougaloo Nine and the library sit-in." On March 27, 1961, nine students from Tougaloo College entered the main "white only" public library in Jackson, Mississippi, in attempt to overturn segregation. The public library was chosen because it was supported by tax dollars of all citizens. The sit-in, read-in was carefully planned by the students and assisted by Medgar Evers, Mississippi field secretary of the NAACP.

The students first went to the "colored" library and asked for books they knew were not there. They left and went to the larger library for white patrons, quietly entering, searching through the card catalog, sat at tables and wrote notes from reference books. 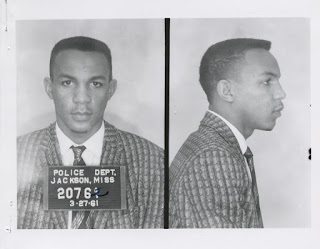 Mugshot of maternal cousin Meredith Coleman Anding, Jr., one of the Tougaloo Nine.

The police arrived and asked them to leave. The students refused. They were arrested for disrupting the peace under the provisions of a 1960 state law making it unlawful for any member of a crowd to refuse to leave a public place when ordered to do so by authorities. The nine spent over 30 hours in jail, were found guilty of disturbing the peace, fined $100, 30 days suspended sentence. 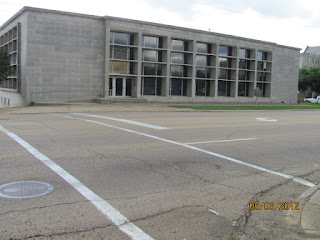 The Sovereignty Commission investigated the nine students. Four students were from Mississippi, three from Tennessee, one from Michigan and one from New York. Police departments did background investigations and found that the students had no criminal records as adults or juveniles. Their parents were hard working, people well thought of in their communities and there was no evidence that their parents were involved with the movement.

President of Tougaloo College, Dr Daniel Beittel, was pressured to expel the students. Beittel who was white supported, ensured the safety of his students and refused to expel them. The Commission provided files about the college and Dr Beittel to the Citizens Council to enlist their aid in investigating and shutting down the college. The commission offer the Tougaloo trustee board that "Dr. Beittel be removed from Tougaloo and in return we can pledge that the legislature will take no action on revocation of the charter."

Dr Beittel was forced to resign 25 April 1964. Below is one of the many correspondence concerning Beittel by the Sovereignty Commission. 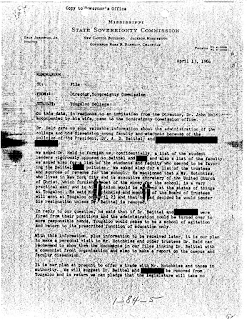 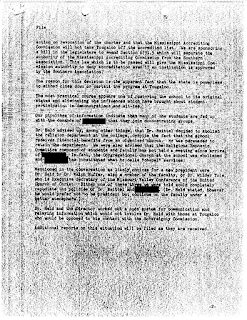 Each of the nine generated dozens of pages in the Sovereignty Commission's files, some more than others. Evelyn Pierce participated in the sit-in at the Woolworth's counter in Jackson and in voter registration drives and other demonstrations. Her parents received death threats. The other students as well as their parents were intimidated, threaten with job loss and received death threats. At one home, Members of the Ku Klux Klan showed up on horseback.

Most of the students graduated from Tougaloo and became productive members of society. All are alive except Pierce.

Summary - The Sovereignty Commission was a state supported agency charged with preventing desegregation. The practices of the commission were similar to a police state. They were a "watchdog agency." They did detailed investigations to build a file on persons whose utterances or actions on racial issues indicated they should be watched. When African Americans became sick and tired of the way they were being treated, they asserted themselves, became determined to obtain their rights guaranteed in the United States Constitution.