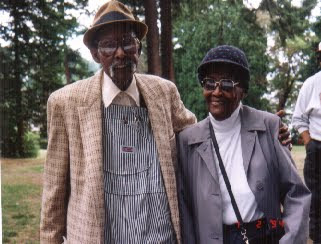 Cheri Herring, the couple's daughter-in-law, shared this newspaper article with me. Below are Cheri's words concerning the incident.

This news story is about my in-laws Robert & Lessie Herring. They had lived in this neighborhood since 1943. The area was and is primarily a white middle class neighborhood. Robert Jr, has told this story to me previously, but this was the first time that I had seen it in published format.

The incident occurred on Saturday, June 29th, 1963. When the cross burning occurred, neighbors came to make sure Robert and Lessie were OK. They were quite upset and wanted to ensure them than no one in neighborhood had any part in this and the police stepped up patrols passed their home. It isn't known if the person who set up the burning cross earlier in the day was the same person who slashed their truck tire later Saturday night. The culprit was never identified. But, there were also never any other incidents. The general feeling at the time was that someone from outside of the neighborhood had learned that a black family lived in this home and was trying to start trouble.

Robert & Lessie remained in this home until their deaths in 1998 and 1999. Their grandson Robert III has owned the home since 2000.

Transcribed from The Seattle Times, June 29, 1963
Mr and Mrs Robert Herring, a Negro couple, of 5513 Kensington Place N, reported to police early this morning that a burning wood cross was implanted in their lawn.

The two foot cross, which had burned itself out, was discovered by Herring as he set out for work at 1 o'clock.

Mrs Herring today spoke without emotion about the incident.

"You start thinking about the people and you can only pity them," she said.

There are only two Negro families in this neighborhood, one moved in recently. We have been here 21 years and nothing like this has ever happened before."

"Oh, there were small incidents when we first moved here but that was long ago. My boy, Robert Herring, Jr., even played on the university of Washington football team."

Mrs Herring said there appeared to be pieces of clothing attached to the cross.

"I don't know who could have done it," she said.