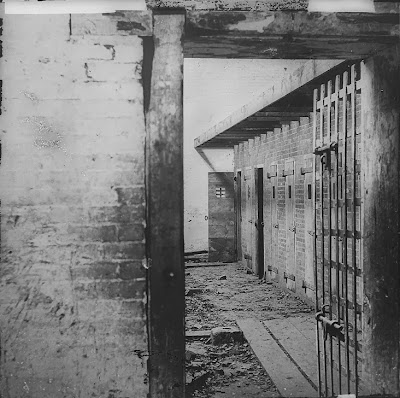 This is a bitter sweet testimony from Jane Harris Burnett who found love in a slave trader's pen in Richmond, Virginia. She and her future husband Robert Burnett likely were frighten, sold from family, not knowing where they were going and concerned about the new owner. John Torrey purchased them in Natchez, maybe at the Forks of the Road Slave Market. I wonder if Torrey was looking for a couple or if one or both asked him to buy them both.

Deposition A of Jane Burnett
Federal Pension Case of Jane Burnett (Widow of soldier Robert Burnett)
March 23rd 1898
Union Church, Jefferson County, Miss
I and Robert Burnett were bought by Mr John Torrey a number of years before the war from the traders at Natchez, Miss; I had become acquainted with Robert at Richmond, Va., where the traders first had us. My name in Virginia had been Harris, but on Mr Torrey's plantation I went by the name of my new owner. I took up with Robert Burnett at the slave trader's yard at Richmond, Va., and lived with him as his wife until his death in April four or five years ago; I cannot give you the exact date of his death. We were never divorced. Robert Burnett died of dropsy of the heart, so Dr McLean who treated him in his last sickness told me. When the Yankees had taken Natchez, Robert Burnett left for that place and enlisted in Co. C, 58 USCT, in which he served three years. After his discharged he returned home.

General Affidavit of John Torrey
In the year of 1852 February I bought them in Natchez, Miss and they lived as man and wife until 1863 when he went in the war and after he returned in 1866.

Source: Federal Pension Records of Robert Burnett
Private Robert Burnett of 58th Regiment, United States Colored Infantry
Digging up the Past at a Richmond Jail
Posted by LindaRe at 3:20 PM