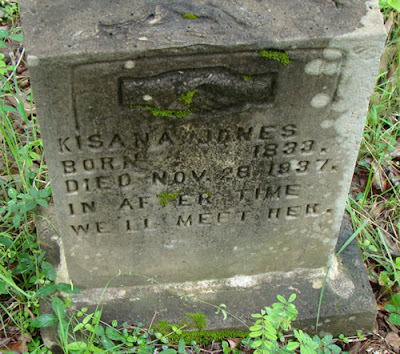 Kisanna/Cassandra Middleton Jones was born between 1833-1845 in Franklin County, MS, on the Columbus Grissom/Grisham's farm. Kisanna's parents were Wilson and Fannie Carnell. The Gisham's farm had a total of 9 slaves in 1860. As soon as she was capable, Kisanna's responsibility was to nurse the sickly mistress of the household, Mary Grisham.

After the War, Kisanna remained on the plantation where she married another of the Grissom's slaves whose surname was likely Middleton. Casandra along with three other freedmen were named on a Freedmen's Bureau labor contract with C. K. Grisham, dated September 12, 1865.

I couldn't find Kisanna in 1870, but she (Cassandra Middleton) was found in 1880 living alone with her four sons: Walter Gainer, 14; Preston Middleton, 10; Joseph Middleton, 7; and Jesse Middleton, 3, in the Cains community of Franklin County, MS. Kisanna worked as a house servant for the William McDonald family and her son Walter was a farm laborer. None of the children attended school and no one in the household could read or write.

Kisanna Middleton married Elbert J Jones, 04 Dec 1899, in Franklin County, MS. His children and hers are all living together in 1900. Elbert owns his own farm free of mortgage. His sons are working as farm laborers and daughter is a day laborer. Kisanna and her children are not listed with occupations. The family is living next door to Dan Buie and his family. According to Kisanna's slave narrative, Kisanna and her family worked for the Buie family. No one in the household had attended school and no one could read or write.

Preston Middleton, Kisanna's eldest son is listed as blind in the 1910 census, living with his mother and her husband Elbert. In 1920, the Middleton's household is full with Kisanna's son Preston, Elbert's son Ebby, Ebby's wife and seven children. Other members of the family are living near them.

Elbert died Dec 31 1928. Kisanna is living with her two sons in 1930. Joseph Middleton is divorced, 56, head of the household and is farming on his own account. Preston, who never married, and Kisanna are unemployed. On 29 Nov 1937, Kisanna died over the age of 100 years. She is buried in the St Luke Church Cemetery in Franklin County, MS.

Kisanna's mother was a slave belonging to Columbus Grissom. Kisanna was born on this plantation about 1834 as a slave. As soon as she was large enough she began helping in the Grissom home. Mrs. Grissom was ill much of the time and Kisanna nursed her and cared for her as long as she belonged to the Grissoms. Kisanna married one of the slaves on the Grissom plantation, but she continued her work at the house.

When the slaves were freed they did not know where to go or what to do with their new found freedom. Kisanna and her husband stayed on at the plantation and worked for wages for several years. During this time her first husband died. She then moved about from one plantation to another for several years and worked as share cropper.

Kisanna married again and moved to the Dan Buie place in District 5. She helped in the house here and nursed the Buie children. She had several children of her own and these boys helped rear the Buie children.

Kisanna and two of her sons now live near the old Buie home. Kisanna is blind and very feeble. She can hardly walk for she is bent and crippled. She has only a few kinks of white hair left. Her oldest son is blind and has a long white beard. Her baby son is more than sixty years old. These three live in an old tumbled down shack; neither of the boys are married.

They like to talk about their masters and old slave days when they were well cared for and happy.