Monroe Markhan and Family
circa 1920 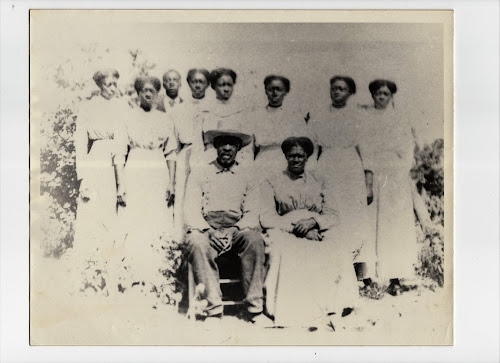 Monroe Markham b. 1852, and his wife Mary Jane Byrd b. 1855, were my great grandparents. They were the parents of seventeen children, 10 daughters and 7 sons. I think the above picture of the family was taken somewhere around 1920, give or take a couple of years. They also appear to be the same group listed in Monroe's 1920 census household.

The couple's children in their own households around the time this photograph was taken were:

I based the age of the picture on when the last son married and left home.

I think those in the above picture are: Monroe, Mary, Mary Jane, Alice, Mattie, Samuel David, Lou Ella, Missouri, Beatrice, and Ina (Inez). I am not sure which sister is which.