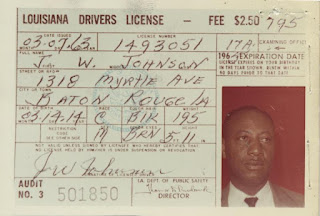 Mississippian Fannie Lou Hammer spoke for many disenfranchised African Americans when she said, " I am sick and tired of being sick and tired." Reverend J. W. Johnson, a native of Brookhaven, MS, was sick and tied and begin to work for equal rights and opportunities. Johnson was labeled an "agitator" by the Sovereign Commission whose primary mission was to preserve the Jim Crow laws of segregation and he would be investigated for challenging racial segregation.

What were his activities that sparked investigation? He associated with members of the National Association for the Advancement of Colored People (NAACP). The commission considered the NAACP a group of northern trouble makers who came to cause trouble among the content Negro people. Johnson attended meetings of FOCUS, another so called subversive Negro organization.

Johnson lived in Baton Rogue, Louisiana in 1961-63, and his wife Dora lived in Jackson, MS. The couple probably was separated. She told the investigator that her husband rarely came home. On Dec 15, 1961, approximately 2000 people peacefully marched through downtown Baton Rogue to protest the arrest of 23 Southern University students the day before for picketing restaurants that refuse to serve African Americans.

Johnson, along with others, placed an open letter to the citizens of Baton Rogue in a local newspaper criticizing the police department for the manner in which they handle the demonstrators. They used tear gas and police dogs to disperse the crowd.

The commission had in the Johnson file, his addresses to both homes, home telephone number, his wife's place of employment, his driver license number, make, model, color of the car he drove, tag number to the car. They knew of his two traffic tickets and how the tickets were resolved. The name and location of the churches he pastored were known by the commission. The above photo of Johnson came from his file.

The first amendment to the United States Constitution gives citizens, the right of the people to peaceably assemble, and to petition the Government for a redress of grievances. Johnson's constitutional right to peacefully protest against his government was violated. He was harassed by the commission and the police department. This should never happen.

Reverend Johnson was a native of Brookhaven, MS. He married Dora Mae Markham. She was born April 12 1907 in Caseyville, Lincoln County, MS, the daughter of John and Ida Blue Markham. The couple had one son. She died in 2001. Rev Johnson died before his wife but the date is unknown. Dora was my mother's first cousin.