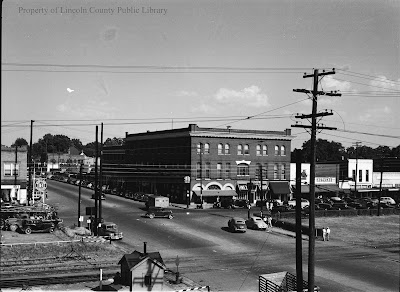 There had been threats of the impending action throughout the afternoon and the sheriff, failing in his efforts to secure a guard of militia, had under him only a handful of deputies who were unable to offer any effective resistance to the large and well armed mob. No shots were fired by the officers defending the jail, only pleas and some physical resistance being offered. Starting at about dusk, and despite the pleading of several of the city's most respected and worthy citizens, among others, Rev. P. D. Hardin, W. D. Davis, Hon. J. A. Naul and Hon. T. Brady, Jr., the mob worked about an hour on the door of the jail, to which the sheriff refused to turn over the keys, and finally came out with two negroes, one of whom they soon discovered was not wanted. They then returned and managed to find the other, James Bearden, who was hiding in the rafters of the jail.

Both negroes were then taken to the Old Brook Bridge and James, in the sight of his brother, was strung to a small nearby tree and shot to death. Stanley was then taken back to Brookhaven and dragged through the streets of the city and through the negro quarters by a truck which was followed by a possession of other automobiles. Leaving the city the party proceeded several miles north and hung what was left of the mutilated body of Stanley Bearden to another tree.

Parts of the large crowd of men, women and children who had gathered at the courthouse to see the lynching followed the cars either to Old Brook or to the point north of town, and viewed the indescribably revolting spectacles to be found at those places.

A short while afterward the bodies were taken in charge by Hartman's undertaking establishment and brought back to Brookhaven, preceding which an inquest was held. The corners jury, composed of B. B. Boyt, E. P. Martin, J. C. Martin, George Stanley, R. C. Douglass and Tom Crawford, pronounced James Bearden dead from gunshot wounds inflicted by parties unknown and Stanley Bearden dead from being dragged behind an auto driven by persons unknown.

The trouble which lead to the lynching commenced late Friday morning when Caby Byrnes insisted on payment of a $6 bill which James Bearden owed him. Mr Byrnes had tackled Bearden for the bill earlier in the day and Bearden had promised to see about it right away. After awhile he returned followed in a few moments by his brother Stanley. In discussing the bill further it is understood that Bearden became extremely imprudent whereupon Mr. Byrnes hit him in the face with his fist.

In the meantime, Byrnes, who happened to be passing near, noticed that his brother was in danger and rushing to the scene hit James Bearden with the flat side of a shovel just after the negro struck Caby Byrnes on the head with a piece of iron, knocking him to the ground. Stanley Bearden then got into the fight and opened fire on Claude Byrnes, one bullet striking him in the shoulder and another piercing one leg breaking the bone and entering the other.

Deputy Sheriff Charles Brister who reached the scene just then, arrested James Bearden without much trouble and took a shot at Stanley Bearden as he made escape through the back of the repair shop in front of which the fight occurred. Archie Smith and Alfred Day, at their work in a barber shop near by, came out during the shooting to assist the Byrnes's in their fight with the negroes with the result that Stanley Bearden fired a shot at both of them, luckily with bad aim.

After making his escape through the back of the shop a crowd chased him up the railroad several blocks until he turned and ran to his home near the Cotton Oil Mill. During the chase several persons started to head the fleeing negro off but were dissuaded by the sight of the automatic pistol he was flourishing and firing.

After the crowd arrived at Bearden's house volley after volley of bullets were exchanged between the officers and the fugitive until the latter weak from wounds was brought from the house, gun still in hand. He was rushed to the county jail where Dr. Frizell, after examination, stated that despite five wounds he was not desperately hurt.